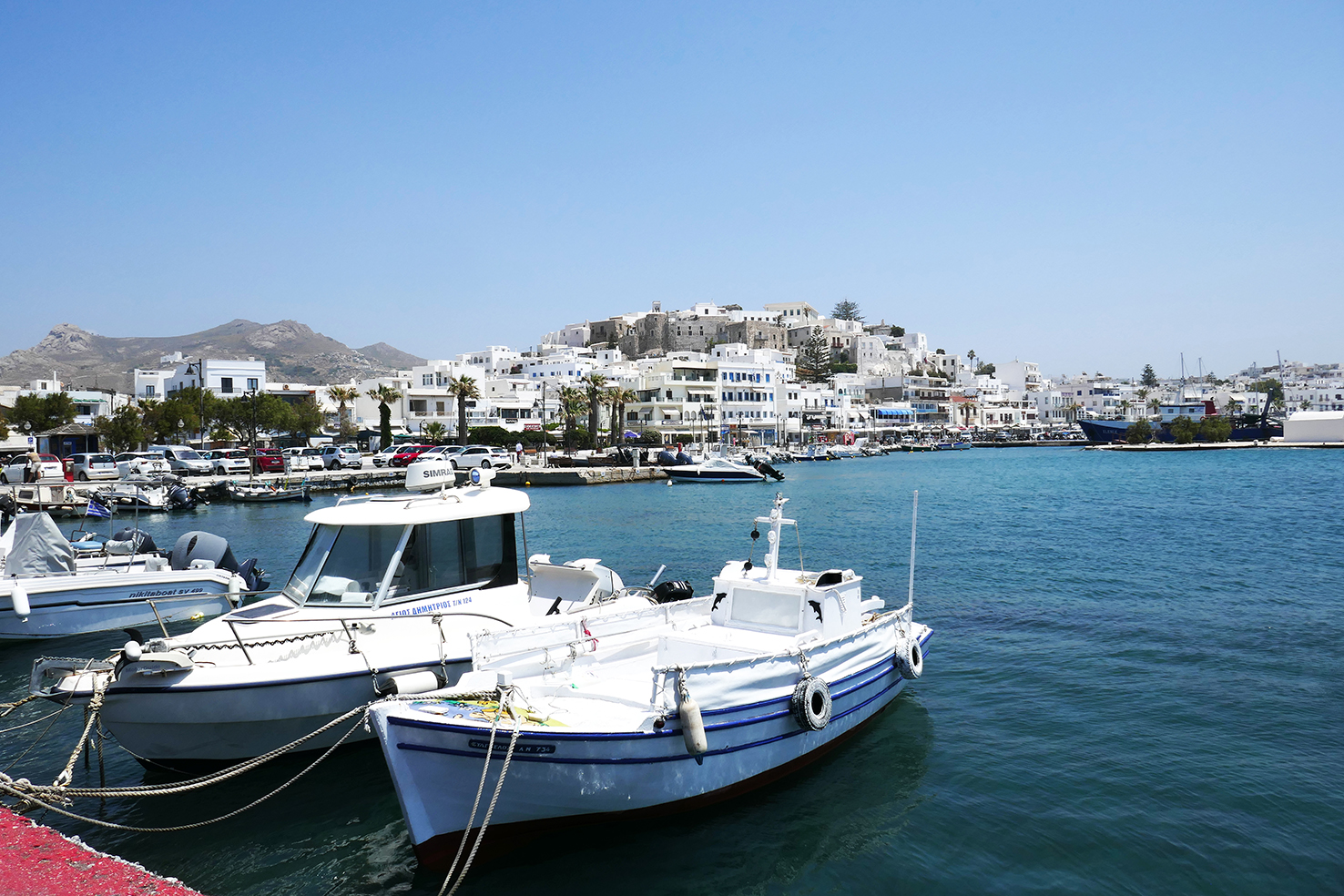 The fortified town of Naxos

Bay’s photojournalist, Liz Barry returns this month after a much longed for trip to the beautiful Greek island of Naxos. She’s very happy to be able to pack her case and her camera and go travelling once again.

When the cabin doors closed and the plane started to taxi along the runway I think I let out a sigh of relief as I couldn’t believe I was actually flying once again. Like most people for the last two years I’ve been staycationing, and now with current disruptions at airports and flights, I had wondered whether I would reach my planned destination the Greek Island of Santorini.

Pic rom the ferry as it leaves the port of Santorini 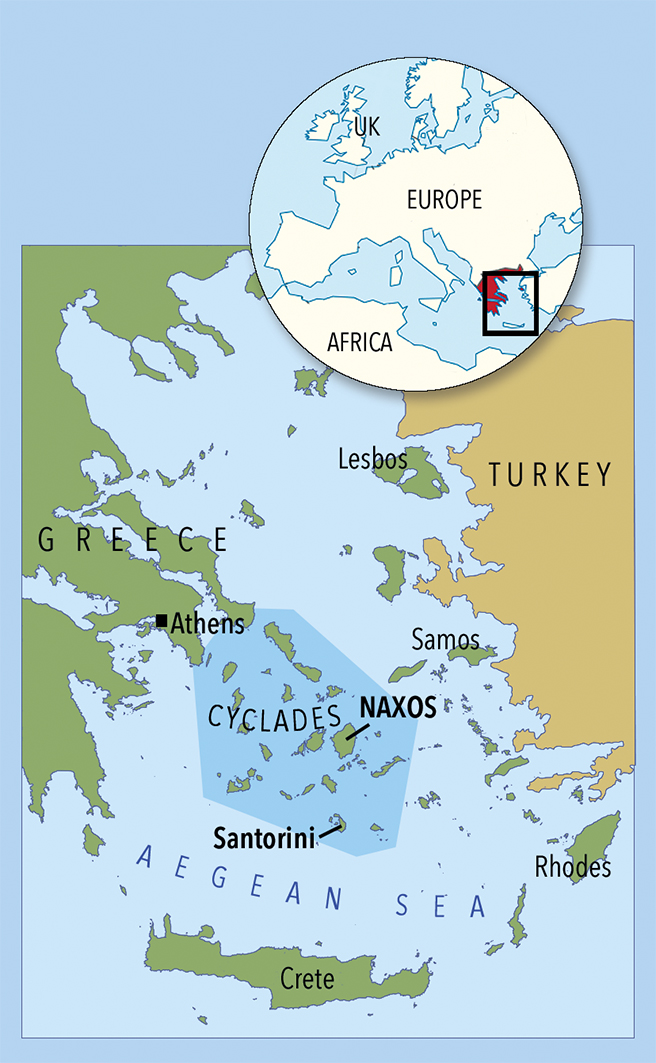 Santorini would only be my starting point to spend a few days island hopping around the Cyclades. After a direct flight from Birmingham it was straight onto a ferry and across the deep blue waters of the Aegean Sea to the island of Naxos.

Venturing up on deck as we sailed out of port, my eye was drawn upwards to the brilliant white washed sugar-cube houses of Santorini precariously clinging like limpets to the rugged cliff edge of the caldera, giving a totally different perspective to one of the world’s top tourist destinations.

Two hours later we arrived into the port of Naxos which is also the main town of the island. You can easily tell first time visitors as they spill out of the ferry and dodge the exiting vehicles, stopping to take photos along the quay. On one side of the harbor are caiques – traditional fishing boats, and on the other side the traveller’s eye is drawn to the Portara (Greek meaning big door) the unfinished temple dedicated to Apollo.

The Portara was built on a small rocky peninsula called Palatia, according to Greek mythology this is the place where Dionysus met Ariadne.

The family run hotel, where I was staying was only 6 km from the port on the south west of the island, positioned on a hillside with breathtaking views across vineyards and gardens, overlooking Agois Prokopios beach. This is rated as Greece’s third best beach and among the top ten in Europe, and was just a 5 minute walk away. It’s protected from the strong winds known as meltemia which are enjoyed by the windsurfers around the island.

Edged by low dunes the northern end of the beach is much quieter, you may see the occasional naturist enjoying the natural beauty of the golden sands and turquoise sea. A saltpan called Kokkini Limni (red lake) lies behind the beach and attracts wildlife and birds including herons. 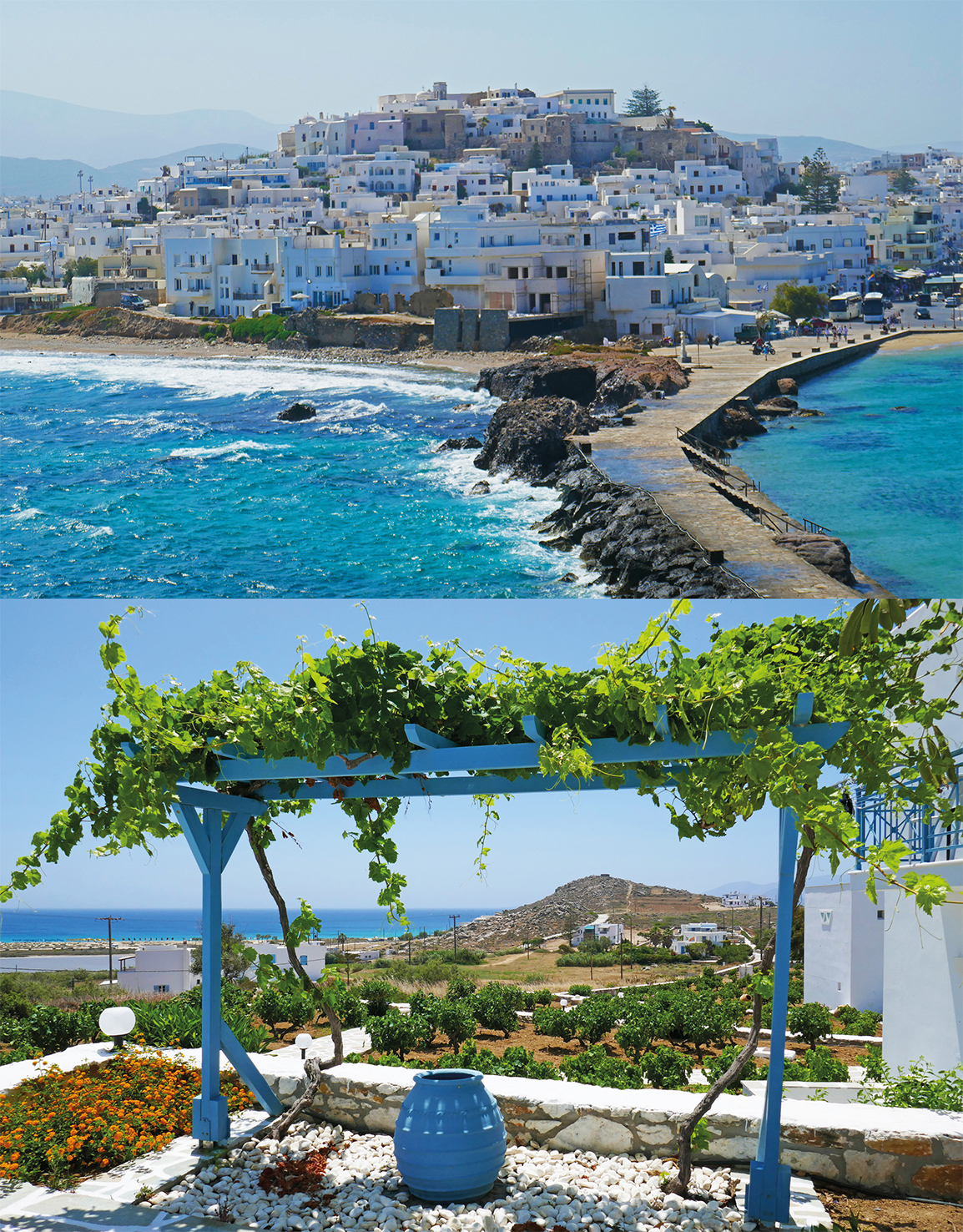 TOP: The town of Naxos with the causeway from the Temple of Apollo ABOVE: View of the vineyards and island from the hotel

The village of Agios Prokopios has around 250 permanent residents and offers numerous options for visitor accommodation, there are lovely restaurants, taverns and bars, many set on or just back from the shore. It is also from here you catch the local bus into Naxos Town, a one-way ticket is €1.80. You can easily get around the island visiting other beaches and villages using public transport. 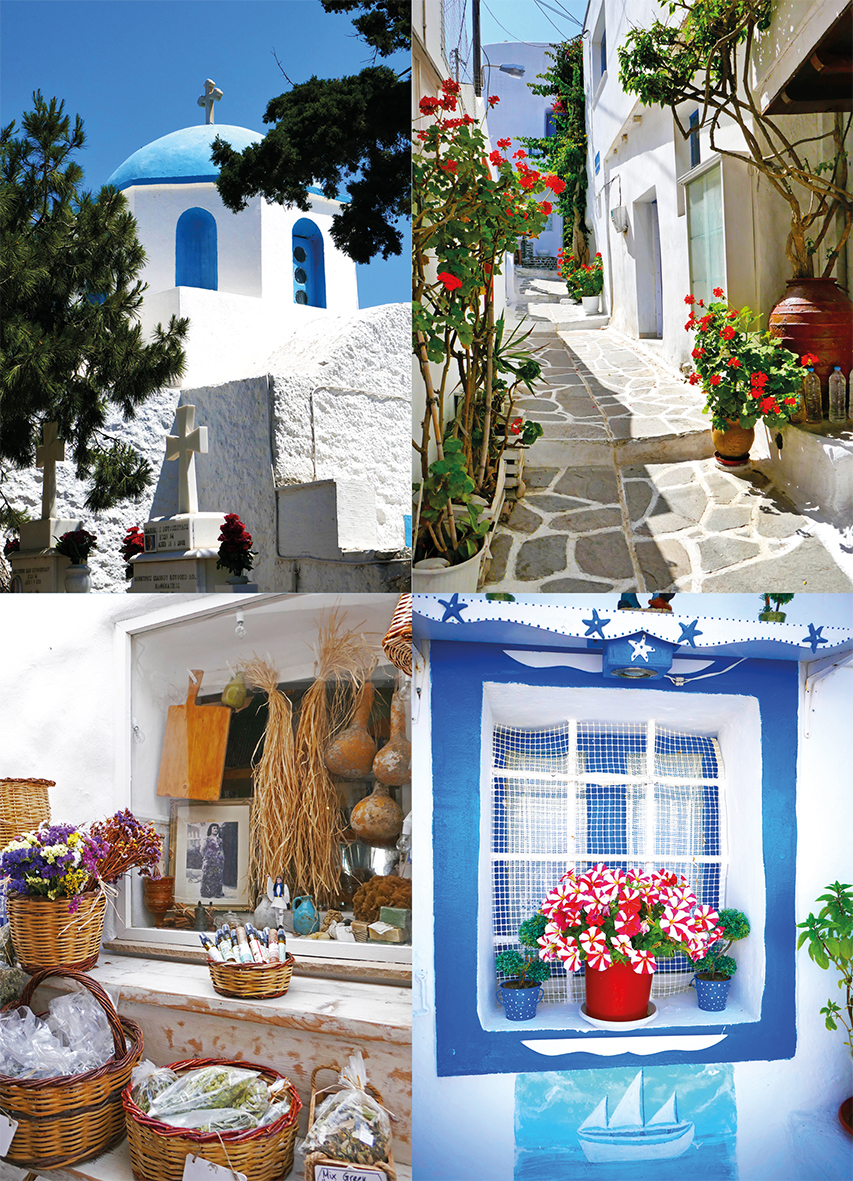 The colourful streets of Naxos

Chora Naxos or Naxos Town, the island capital never rests not even when the summer visitors leave. It’s a commercial centre which serves the islands population of more than 18,000 permanent residents.

It’s the biggest town on the island, and is also considered one of the most beautiful in the island group as it has kept its authentic and traditional character that combines Venetian and Cycladic architecture. The settlement was built upon the ruins of an ancient town; the oldest findings have been dated back to 4000BC.

At its heart stands an imposing Venetian castle, in the shape of a pentagon which rises up on a hill above the old town where the Bourgos (from the Italian word borgo, meaning fortified settlement) area can be found.

Wandering through the maze of covered white washed alleyways and cobbled streets is a way of escaping the hot sun and an opportunity to shop for handmade jewellery, silverware, clothes, ceramics and art in the boutiques. 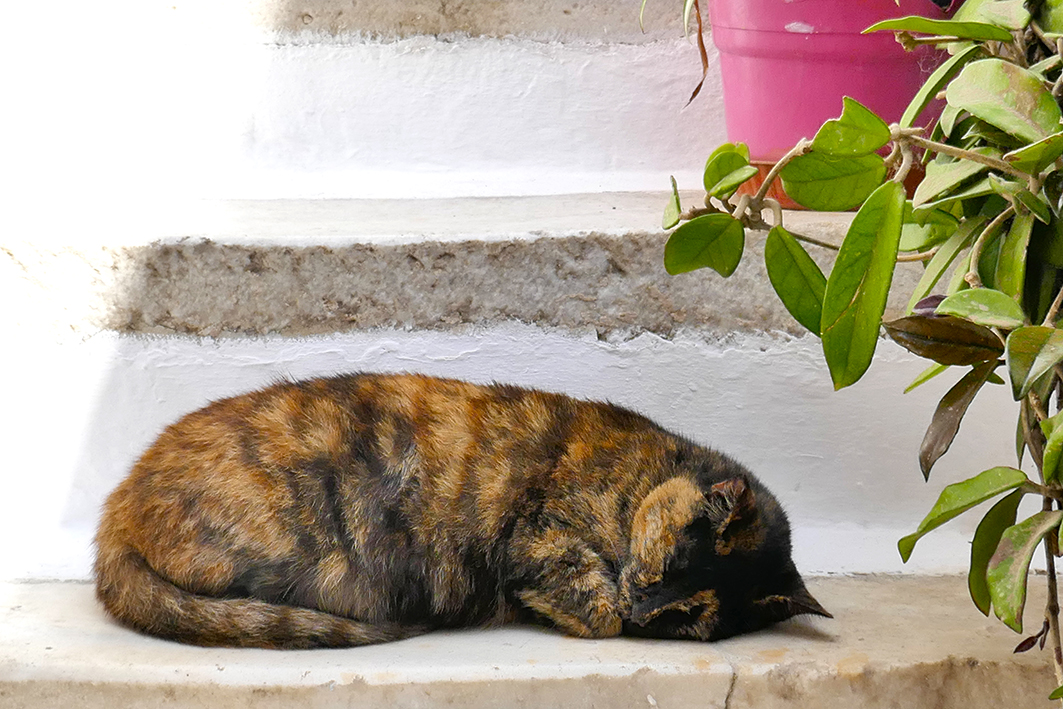 Every lane opens onto another, snowy white house fringed with splashes of blue and red paint, with shuttered windows and old weather-worn doors hanging off their rusty hinges. Blood red geraniums dazzling in the sunlight like jewels make a break for freedom through wooden slatted fences, while clay plant pots oozing with orange daisy like flowers add to the charm.

The Medieval atmosphere prevails throughout the Kastro (castle) area with old churches and monuments. In the central square one place worth visiting is the Archaeological Museum of Naxos, housed in a 17th Century Venetian building which was a Jesuit school. Objects found in excavations carried out over the years are exhibited here; from everyday items to art dating back to early Christian times. In the third millennium BC the Cycladic Civilization was at its peak and Naxos was a centre for art. 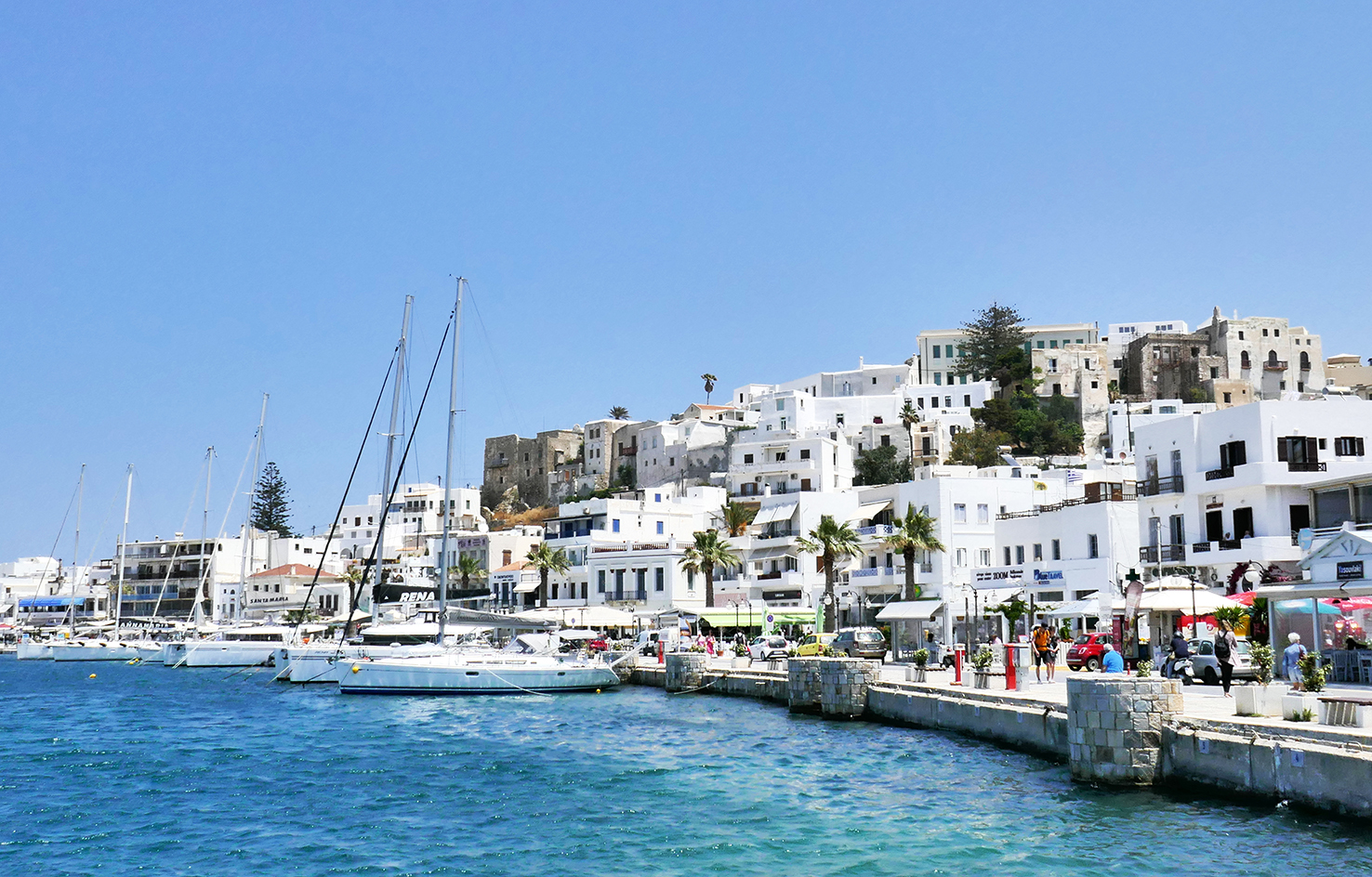 Promenade of Naxos Town with its bars and waterfront cafe’s 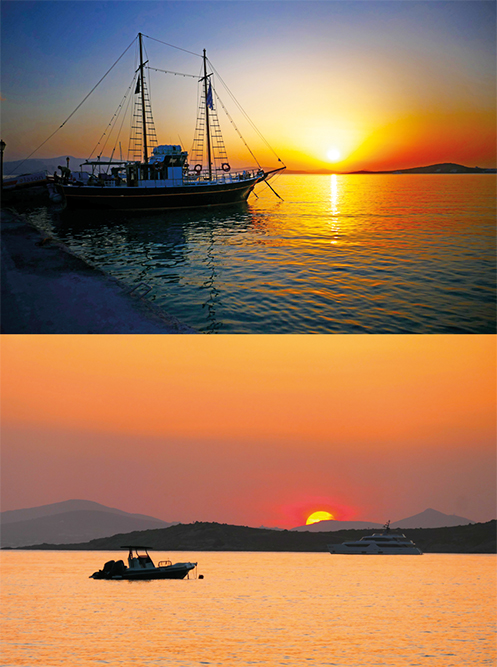 As you leave the shade of the old residential streets, your eyes have to adjust to the bright light, while the dark blue waters lap against the stone wall of the port’s promenade. It’s a lively area and the perfect place to people watch. Just take a seat in one of the waterside cafes, and enjoy the view as boats dock and sail from the piers whilst you sip a coffee or a cool drink. And as the Greeks say ‘Yamas’, their version of “cheers” which means “to our health”.