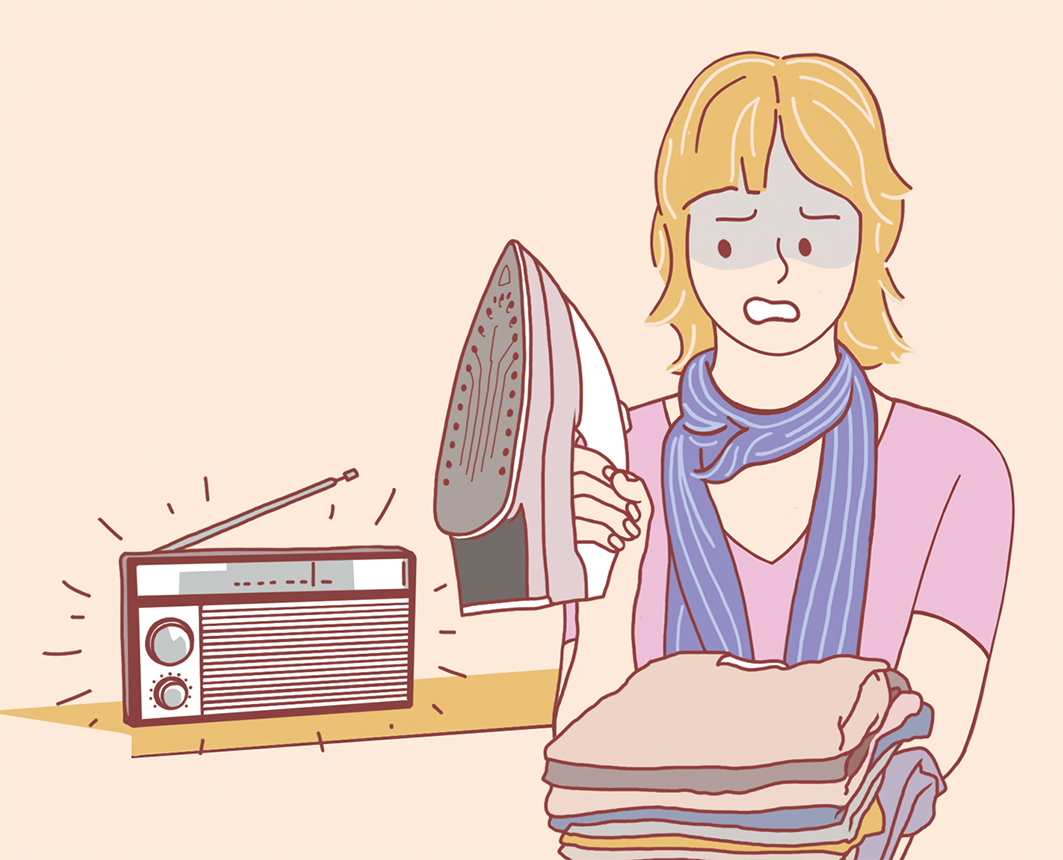 This month Liz Hinds is venting her spleen at Dean Martin. Not that she really is cross with him per se, just the lyrics of one of his hit songs.

I was talking to inanimate objects long before Prince Charles told us he chatted to plants or before we saw Shirley Valentine greeting her kitchen walls.

I’ve been doing it most of my life but lately I’ve noticed the pitch of my chatter has increased. I seem to be spending a lot of time not talking to but shouting at things. I’d like to blame lockdown or Brexit but I fear I may just be turning into a cantankerous old woman. Lest you wonder how, say, the sofa could have upset me let me explain that most of my shouting is directed at the radio. I’ve had to stop listening to the news. Burying my head in the sand is better for my state of mind I find.

Recently Ed Sheeran played a number of gigs in Cardiff. Fans sat in fifteen-mile-long traffic jams as they tried to make their way into the city. A lot of people love Ed Sheeran. Now I have a confession: I wouldn’t recognise an Ed Sheeran hit if he stood in front of me and played it. I think I lost track of music about twenty years ago.

Growing up in the fifties and being a teenager in the sixties it was a different story. Every night you’d find me under the bedclothes glued to my little transistor radio listening to Radio Luxembourg. I can still sing most of the hits from those days. Which probably explains why I can never remember what I went upstairs for. My brain is over-loaded with corny lyrics.

I wasn’t keen on much of the seventies music, and in the eighties, well, I had babies, and the rest is a blur. In the nineties I had a teenage daughter so I became familiar with Madonna and Take That, while my sons were into garage and hip hop, which I blanked out as much as possible.

For the last twenty years or so I’ve simply retired into old music – Bruce Springsteen and George Ezra being the exceptions, although I suppose the Boss is hardly a youngster himself – with the result that when Granddaughter1 asks me if I’ve heard the latest song from her favourite singer I just look at her blankly and shake my head. I don’t like to tell her I haven’t even heard of the singer.

No, if you wandered into my kitchen you’re far more likely to hear the mellifluous sounds of Ella Fitzgerald, Nat King Cole or Elvis. Easy listening music of the very best kind. Or so I thought until the other day when I yelled at Dean Martin.

Picture me working slowly through a mountain of ironing when I decide I feel like a bit of Deano. It starts off well with ‘That’s Amore’;  it gets even better with ‘Sway’ which brings back memories of dance classes and has me trying to rumba around the ironing board; then it’s into cowboy mode with ‘My Rifle, My Pony, and Me’. By now I am pretty relaxed as I swish my iron over the clothes. Then the next song begins, ‘You’re nobody til somebody loves you,’ and that’s it.

“Rubbish!” I shout at the machine. “That’s nonsense.”

Yet it’s nonsense that a lot of us will believe because it buys into the notion that our worth depends on what others think of us.

Last month thousands of people made the effort to go to London because they love the Queen. People sat in hot sticky cars on the outskirts of Cardiff for hours because they love Ed Sheeran. That sort of adulation is something most of us will never know – although I live in hope!

But I want to remind myself and all of us that our value does not depend on us being loved by millions, or even one. We’re not nobodies; we are somebodies.

In his letter to the church at Ephesus Paul wrote, “It’s in Christ that we find out who we are and what we are living for. Long before we first heard of Christ and got our hopes up, he had his eye on us, had designs on us for glorious living, part of the overall purpose he is working out in everything and everyone.”

We are not in the world for nothing. We have a purpose and a worth. We are here to be loved by God who wants a relationship with us. It’s crazy, why would God want a relationship with me? Does he know what I’m like? Of course, and that’s why he wants that relationship to be a two-way thing, a sharing of hopes and dreams, a time for reflection, for regretting and forgiving, and healing.

Because he, the creator of the universe, thinks we’re worth it. Not because millions of people love us or because we were on the front cover of Vogue. But because he sees in us our inherent worth. Just because we are.