Steeped in history and surrounded with spectacular views, Oystermouth Castle has long been one of my favourite Swansea attractions.

If you’re ever stuck for ideas of where to go and what to do, you can always rely on the fortress perched high on a Mumbles hill to keep every-one happy for a few hours by exploring its hid-den history, surveying the land from the battlements, or maybe a doing little ghost hunting in search of the elusive White Lady.

The best time to visit is during the summer months, and August in particular, and not only because, as a historical attraction, it’s a little exposed to the ele-ments, but because there’s always plenty of planned activities taking place, which this month include some guided tours and live theatre.

On August 3, for a small fee, you can discover the land-mark’s occasionally horrible history by joining an expert guide for one of the three tours taking place throughout the day, which will not only allow you to see the castle in a whole new light, but you’ll be able to amaze your friends and family afterwards with all the bits of trivia you pick up along the way.

Two short days later and outdoor live theatre arrives with the family-friendly fairy tale Rapunzel courtesy of IKProductions, who have been de-scribed as “delightfully daft” by The Stage. The well-known tale of a captive princess witch exceptionally long hair promises some slapstick humour and pup-petry as the world of witches and trolls comes to life.

Finally, it wouldn’t be summer in Oystermouth with-out some Shakespeare, and this year Quantum Theatre will be stopping off with their touring pro-duction of Shakespearean favourite A Midsummer Night’s Dream on August 25. The comedy, in which a group of young lovers find themselves the playthings of the mischievous fairy folk, will be performed in the evening, which is the best time to experience the switch between our world and that of the fairies as the sun sets, and if you can’t make this performance there’s also a chance to catch it in Port Talbot’s Margam Castle earlier in the month on August 7. 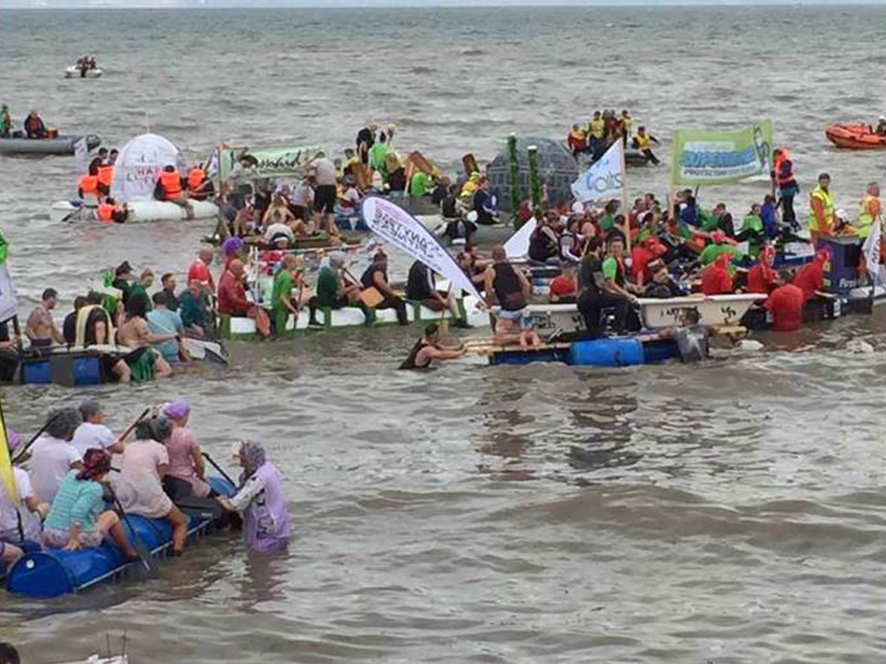 Talking about Mumbles, the RNLI Mumbles Raft Race – one of the area’s most colourful annual highlights – also returns for the 35th race this month and, if you’re visiting Oystermouth Castle at the same time, you might even catch a glimpse of the action from the battlements.

Of course, the race is best experienced up close and personal – close enough to get splashed with some salty sea water. For those new to the event, it sees enthusiastic teams from the local area create seaworthy rafts with which to battle it out on the high seas, and there’s usually a lot of fancy dress involved. Think Wacky Races on water! For many teams it’s the taking part that counts, and at the end of the day, it’s all for a great cause – to raise funds for the lifesavers at the RNLI. 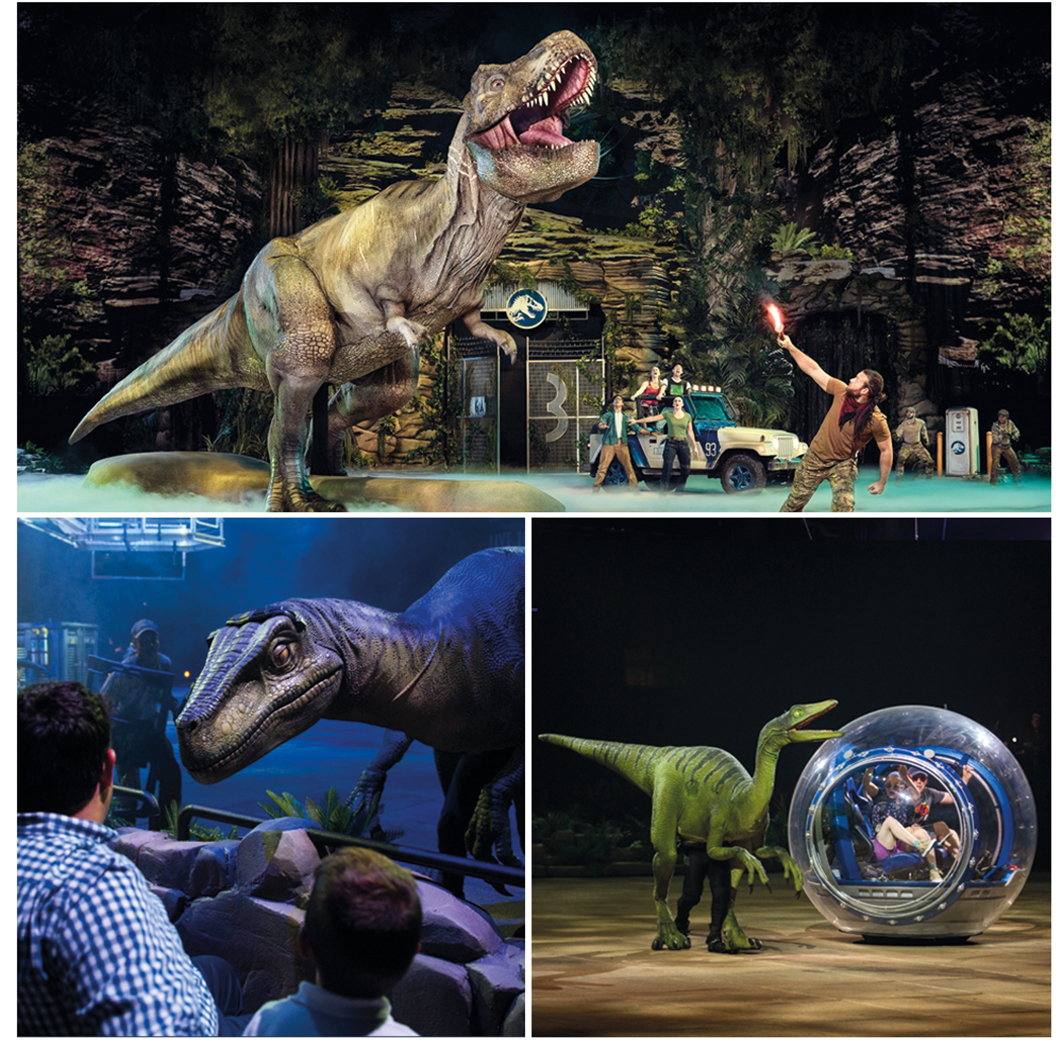 Trends might come and go, but there’s one thing children will never tire of: dinosaurs. Since what seems like the Jurassic period, little ones have had an unwavering fascination with the long-extinct reptiles, the bigger and scarier the better, and with the latest Jurassic World film riding high in the box office, that fascination will be as strong as ever when Jurassic Live arrives at Swansea Arena this month. A theatrical experience that’s even better than watching CGI creatures on the big screen, this live show brings 90 minutes of “the UK’s most realistic life-sized moving dinosaurs” to the stage, along with actors and its own storyline. This isn’t just random set pieces, but a piece of storytelling with some pretty big and scaly lead actors. 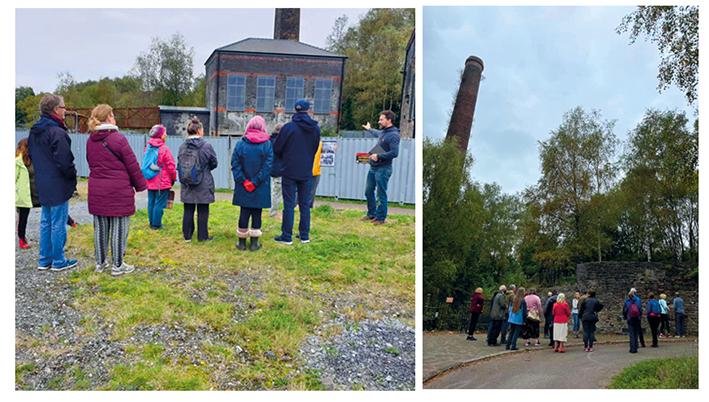 During the Industrial Revolution, Swansea gained a world-wide reputation as ‘Copperopolis’ due to the quality and quantity of the copper it produced for a global market. While those glory days might be long gone, signs of Swansea’s historical links with the copper industry still remain along the banks of the River Tawe near the Swansea.com Stadium, and anyone wanting to find out more about the city’s fascinating history can join a free guided walk on August 20.

That date also conveniently – barring any fixture changes – happens to be the same day that the Swans are home to Championship rivals Luton Town, which means you can combine a historical walk with a trip to the football for the perfect day out. There’s no need to book, just turn up at the meeting point opposite the Landore park and ride building at 11am and set off for a morning walk of discovery.

Migrations, the ambitious new opera from Welsh National Opera, was due to premiere in 2020 to coincide with the 400th anniversary of the Mayflower’s voyage to America. A pandemic-enforced delay meant that it finally took to the stage two years later and, not only was it more than worth the wait, but the ways in which the world has changed in recent times added a further power and poignancy to its central theme, that of the movement of people and the prejudice that often accompanies such journeys, perfectly highlighting how the lens through which we view a work of art is very much a product of the time and place in which we experience it.

Directed by Sir David Poutney with music composed by Will Todd and conducted by Matthew Kofi Waldren, the concept of migration is explored in six separate stories that span the world and the centuries, from the puritans who set sail for the New World back in 1620, to the Indian doctors who arrived in twentieth century Britain to save the NHS. Of them all, the one which proved to be the most rewarding was also the unlikeliest; Birds, performed by a group of young children who dashed around the stage flapping their arms with all the charm of a school pantomime. Their tale was interspersed throughout the opera and acted as a form of pressure valve, seemingly offering a moment of comic relief before the next hard-hitting story unfolded, but just before the show reached its climax, the youngsters served up the most dramatic sucker punch of all.

Musically, Migrations is a suitably eclectic mix that reflects each individual tale, ranging from haunting laments to joyous movie soundtrack-like numbers, at times sounding more like a Star Wars film than a traditional opera, with a stand-out set-piece being a dance-filled Bollywood scene. It also allowed the WNO Chorus to shine, who with their numbers bolstered for the occasion, proved once more how they can rise to the big occasions. While Migrations isn’t perfect – at times its ambition threatens to overwhelm it, most noticeably at the finale, and an uneven libretto results in the over-simplification of some rather complex issues – these are minor quibbles in what was a fantastic achieve-ment seemingly tailored to highlight the WNO’s strengths.

The advertising material for the opera describe it as an “epic drama”, and in this case, it isn’t hyperbole; Migrations is indeed epic.