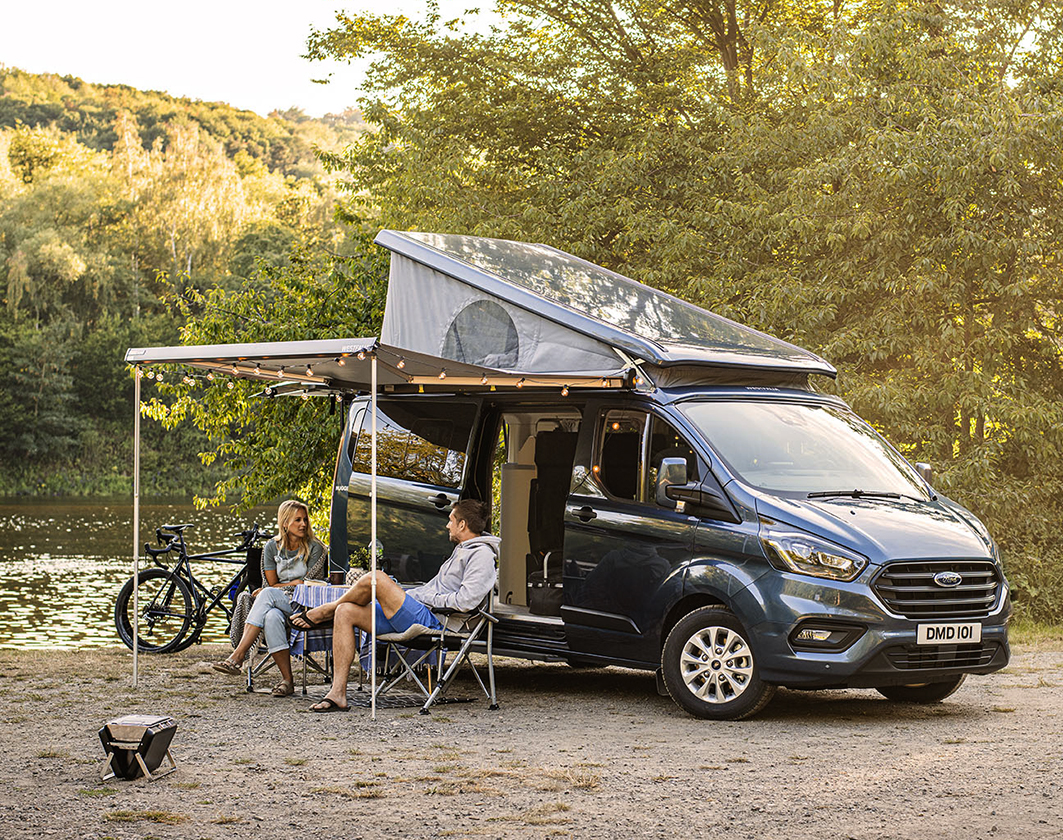 Hmm… Writing a review of Ford’s Nugget Plus campervan without inadvertently making it sound like an estate agent’s listing probably isn’t going to be that easy. Do you review the van – in this case a 2.0 litre Diesel Ford Transit Custom of medium wheelbase (the reason for which will soon become apparent) or the accommodation it offers – believe it or not, over two floors?

An estate agent trying to highlight the attractions of the Nugget Plus might write something along these lines.

FOR SALE: A thoroughly modern and solidly built mobile dwelling constructed in the traditional style so typical of that long established partnership of Westfalia and the Ford Motor Company. Accommodation is split over two floors and comprises of the following.

Ground floor: A compact and bijou open-plan living-room/kitchen/dining area with fully-fitted galley-style kitchenette to the rear, complete with integral 40 litre fridge, double-ring gas-hob, and stainless-steel sink with both hot (electrically heated) and cold running water. A range of under-counter purpose-built storage options are fitted, and the room also benefits from the addition of sliding doors (to outside) on both sides, plus feature windows – both heated front and rear – with fitted curtains. This most versatile of spaces seats up to five people and can easily be converted into a full-size double bedroom. Lighting is by 12V Led lamps.

First Floor: A treble aspect full-size principle bedroom situated beneath an elevating, pitched, roof. Construction is of composite and canvas.

Heating to both floors is by oil. (More accurately diesel).

Outside there is a full-length garden/patio area covered by a retractable awning that offers the perfect place for alfresco dining, or an evening’s entertaining. Further storage is also provided for the garden furniture (a fold-ing table and two folding chairs) which is included in the purchase price.

Bathroom: Shielded by a retractable privacy screen, the extended wheelbase of the Nugget Plus (over the more compact Nugget) allows for the fitment of a built-in cartridge-type toilet, for greater convenience. The area also includes a folda 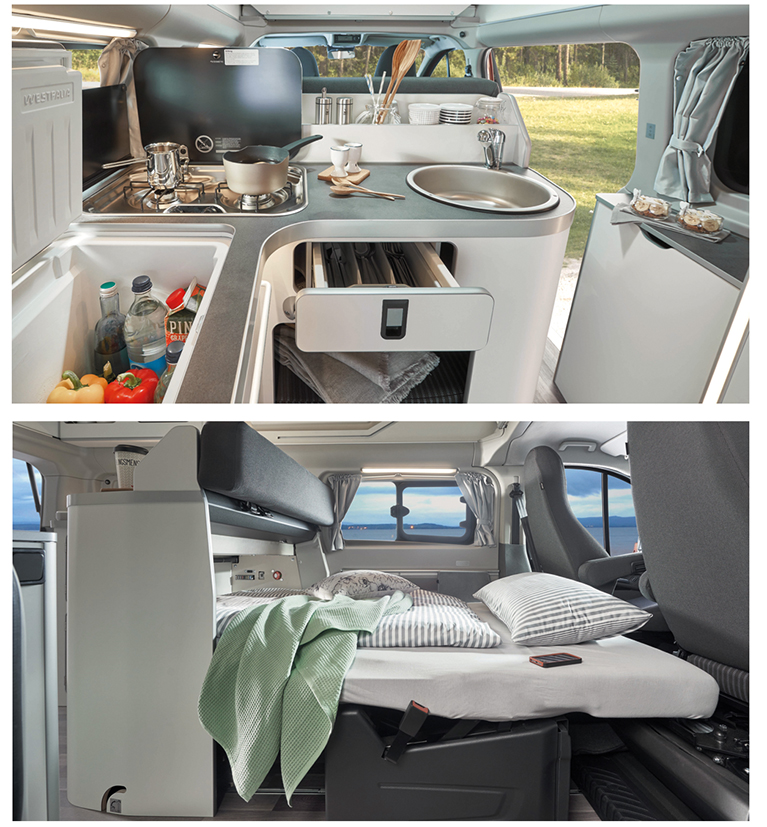 way wash basin, and an attachment for an out-door shower – both benefit from hot and cold running water. Fresh and waste water is catered for by two on-board tanks each with a capacity of 42 litres.

Funny how an estate agent can “flower things up” a little isn’t it? Nevertheless, the Nugget Plus can seat five in relative comfort – the rear bench is a tad upright – and, with the pop-up roof erected, it will sleep four, or perhaps two adults, and three small(ish) children. Things would definitely feel compact and bijou with 5 aboard. And that “bathroom” is, effectively, in the kitchen; the loo is directly opposite the fridge, which in my book means it’s there strictly for use in absolute emergency situations only. (To be honest, I think I’d rather swallow a handful of Imodium and take my chances) 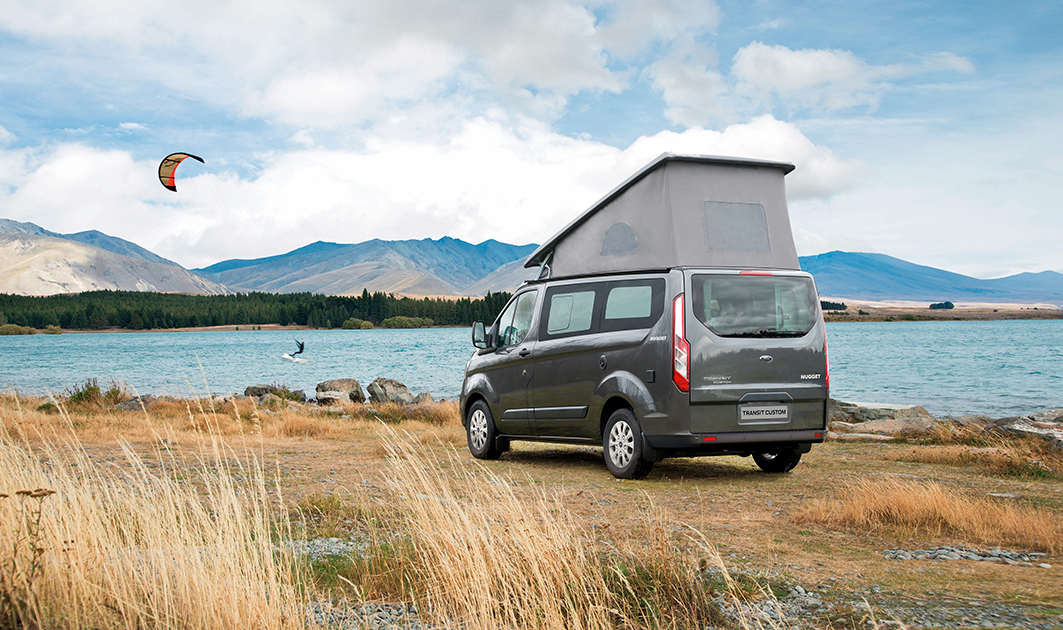 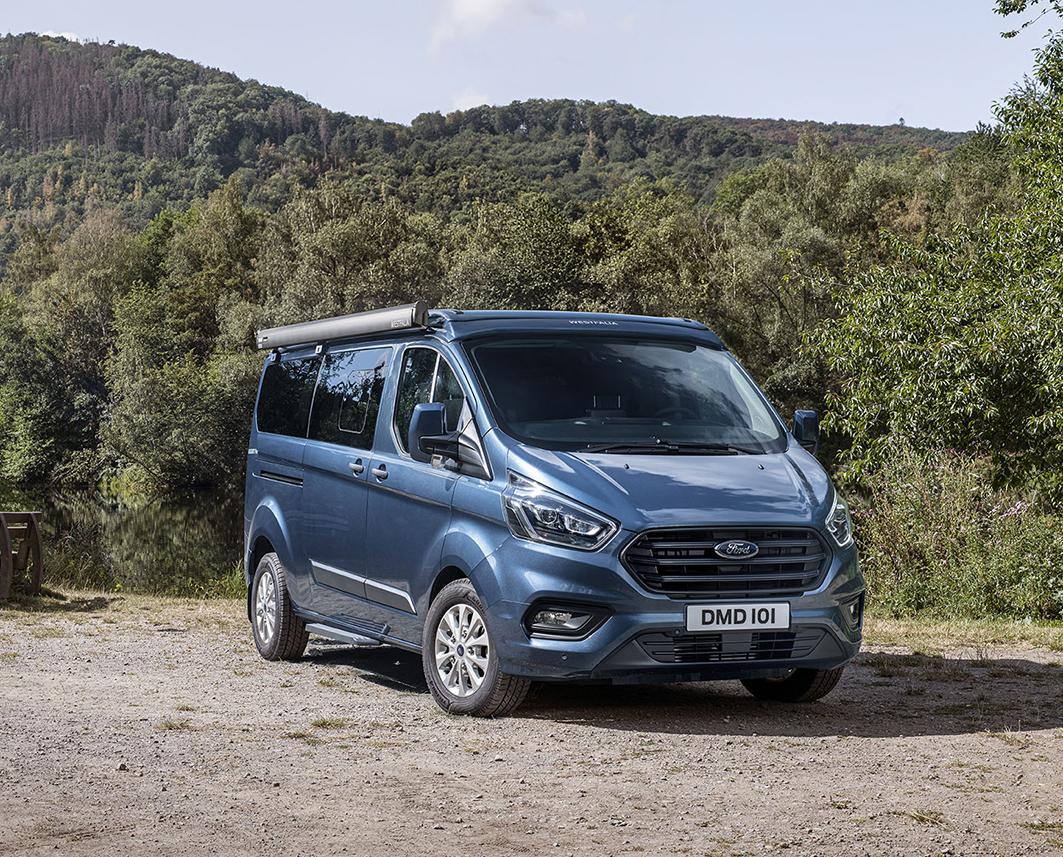 Let’s not dwell on that. Questionable location of its water closet aside, the Nugget Plus is, for what essentially is a Transit van, not such a bad place to be. “My” van came with Bluetooth, climate control, parking sensors, heated seats (in the front), optional sat-nav and enough cubbies, and cup-holders, to make anyone a happy camper. A few more USB ports up-front wouldn’t have gone amiss though, neither would more storage space further aft – that kitchen has stolen what would otherwise be a “bootspace”.

Performance however, wasn’t lacking – although that said “my” Nugget Plus came with the now no-longer available 183bhp diesel engine coupled to Ford’s slick, six-speed auto box. We happily cruised at the legal limits and returned approximately 35mpg whilst doing so. Once you’ve acclimatised to its size – although it’s not that much bigger than many a seven-seat SUV-, the Nugget’s as easy to drive as a Fiesta. The steering is light, albeit surprisingly direct, there’s not anywhere near the amount of body-roll you might have expected, and despite being based on something more akin to transporting pallets than people, the Nugget’s ride is never what you’d call uncomfortable. Wind noise is kept to minimum too. 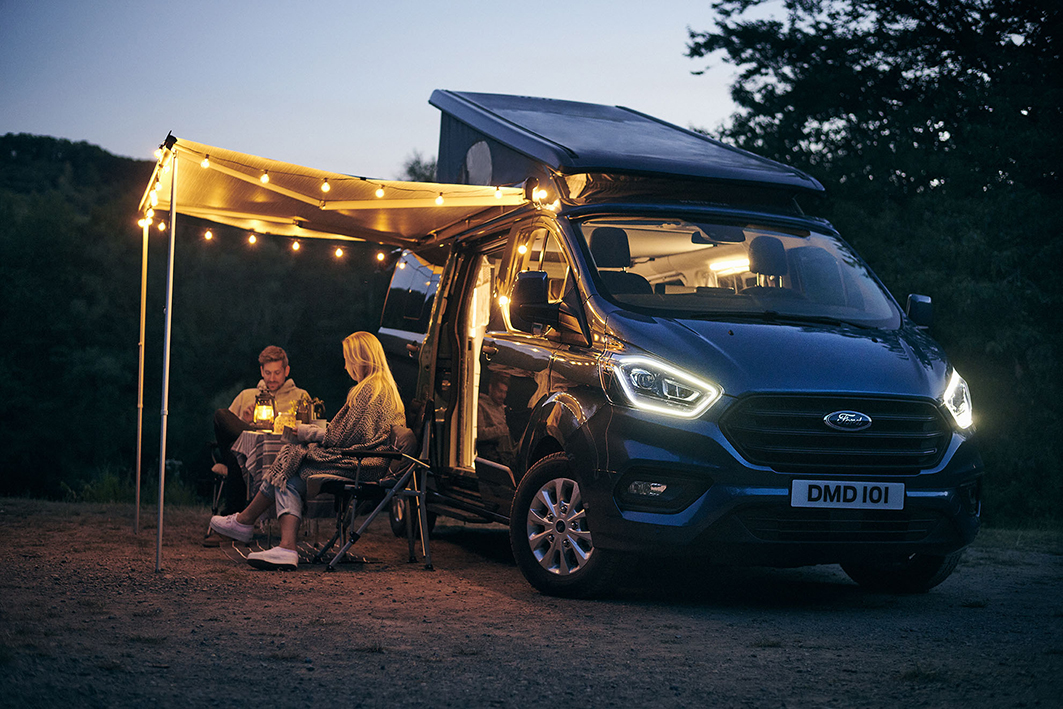 That said there was a very annoying and untraceable rattle coming from somewhere deep beneath the Nugget Plus’s dashboard. No doubt, as press demonstrator our particular example had already lead quite a hard life. But isn’t that what you expect from a camper; something that can cope with anything that life can throw at it?

I’ll readily admit I’m not really campervan material, give me a Premier Inn over a pitch at Pwllheli any day of the week. I think the Nugget Plus’s 82-grand before options asking price is a tad steep too (Volkswagen’s range-topping California starts at £72,980, albeit sans bog in the back). Imagine all the round-the-world air tickets you could buy for that!

Nevertheless, I will concede, if a campervan is your thing, and you are prepared to fork out what might appear to some as a second mortgage on one, the Nugget Plus might well be worth more than just a second viewing. 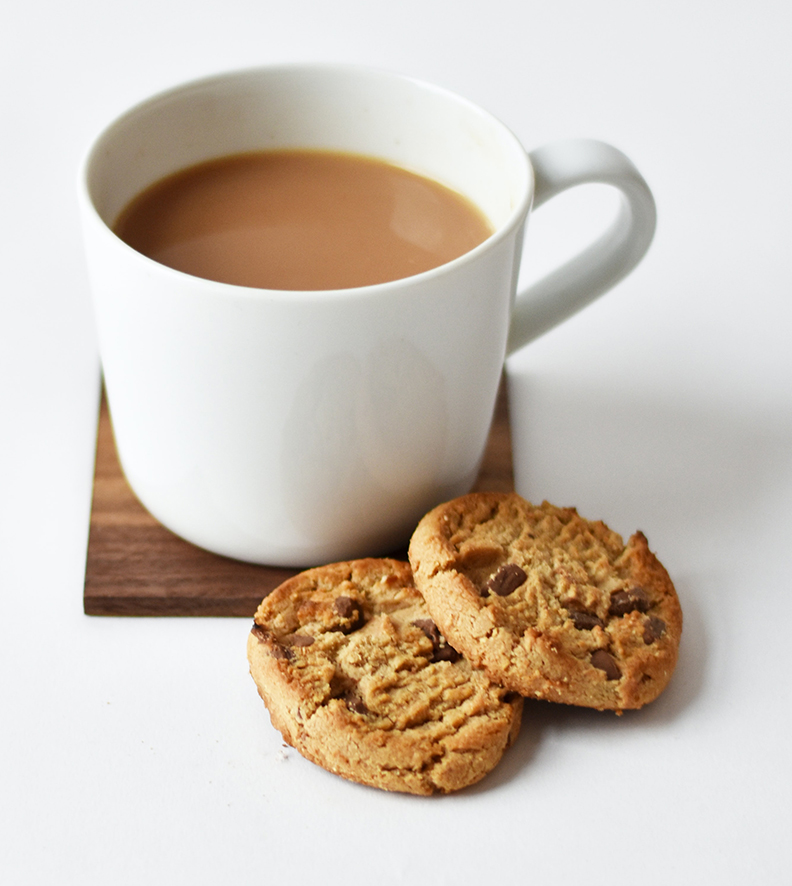 Tea? With you in a Flash

I’m as partial to a cuppa as much as anyone, especially if it comes with a biscuit (or three). But what I’m not so fond of is the whole ceremony that sometimes comes with it; teapot, tray, cup and saucer, an extra pot of hot water you’re clearly never supposed to pick up because it’s so hot it’ll instantly take your skin off… stick a bag in a mug, add boiling water, and brew. Splash of milk, done. Or at least that’s how it should be done. Builder’s tea or perhaps in my case, Engineer’s, is the elixir. Don’t ever let that tea bag touch the milk. And whatever you do, don’t put the milk in first!

Perhaps it’s that appreciation of things that are made properly that drew my eye towards the JetBoil Flash. Designed to boil half  a litre of water in just 100 seconds it’s surely the perfect companion for someone who enjoys a quick brew – or a of bowl soup, porridge, or noodles – more often than not when there isn’t enough time or space to make all the unnecessary fuss.

Weighing in at just 371 grammes (teabags, milk, and chocolate gingers not included) the JetBoil Flash consists of a 100g of isobutane-propane gas canister, burner, folding three-legged stand, mug/integrated cooking pot – complete with lid and very funky thermochromatic cosy – and an all-important bowl-cum-measuring cup that also doubles as a protective cover. The Flash also benefits from a push button ignition system – no windy day match striking dramas here – and it all packs down within itself so it’s as compact as it can possibly be when you’re not using it. Handy that, when you’re stuffing a rucksack.

Or in our case, packing a camper van.

on board a many a motorhome. Nevertheless, carrying the JetBoil with us during a few days away meant we didn’t have the hassle of connecting and disconnecting the van’s gas bottle every time we stopped for a tea break; you’re not allowed to drive with the gas connected, and sometimes it’s a right palaver to so do so. Whereas it takes seconds to assemble the Flash, and once lit, there’s barely time to find the mugs before that clever cosy has turned red to tell you the Jet has, well… boiled. That chameleonic cosy, together with the corrugated heat exchanger that helps protect the burner from the wind, also helps you save fuel, and it stops you boiling anything over. It also allows you to handle the pot while it’s hot. Clever.

What perhaps isn’t so clever is that the Flash’s regulator can be a tad all-or-nothing. If you’re intending to use it for more advanced cooking duties you might find it’s difficult to find a gentle simmer setting. Jetboil offer other similar albeit more adjustable systems for the more creative outdoor chef. Clipping the stand to the gas canister takes a bit of practice too.

That said, the Flash really has proved itself invaluable recently, (They were charging £7 a cuppa at Hay Festival!).  It’s well made, brilliantly intuitive to use and assemble, and being more than a bit of a neat freak, I love the way everything has been designed to pack away inside itself without rattling around. I like the noise it makes when it’s lit too; like a jet engine. Instant hot chocolate has never sounded so good.

You can pick-up a JetBoil Flash for around £90. It feels like it’ll last a lifetime, and in certain circumstances it may prove invaluable. Chocolate gingers, the nice ones, are about £1.50. In my company, a whole pack usually lasts about three minutes.