A dusting of pollen from a marigold/Foxgloves making for excellent foraging/ Note the tattered wings on this aging lady foraging on vipers Bugloss/ Foraging on a geranium.

Just as in the saying ‘as busy as busy bees’, our bee colonies are extremely busy foraging for pollen and nectar throughout these long summer days. Privet, bramble and lavender as well as a whole host of wildflowers are in favour at the moment. The bees are up and out before eight in the morning and after repeated visits back and fore throughout the day, they’re getting back to their hives around nine in the evening. The average lifespan of a worker bee is just five weeks at this time of year, their life shortened in part due to exhaustion from near constant flying.

We have a good flow of honey building up in our beehives. There is an abundance of forage around now and the smell coming from the hives, when we open them for an inspection, is absolutely glorious. They smell like the biggest bunch of flowers in the world, rising from the boxes. This smell is a sure sign that the nectar flow is plentiful.  At other times of the year we can smell nothing other than wax and warm honey from their stored supplies. We’ve had to add more supers, (extensions) onto the hives to make sure that they have adequate room in which to store the growing amount of honey. We haven’t always got the timing right with this.  When we left it a little too long we were faced with a lot of brace comb between the boxes which the bees had already filled with honey.  Needless to say, when we lifted the upper box, we split the brace comb allowing the honey to escape and make a sticky mess! The bees will clean our mess up no problem, but the honey which spills to the work area adjacent to the hive can attract robbers. 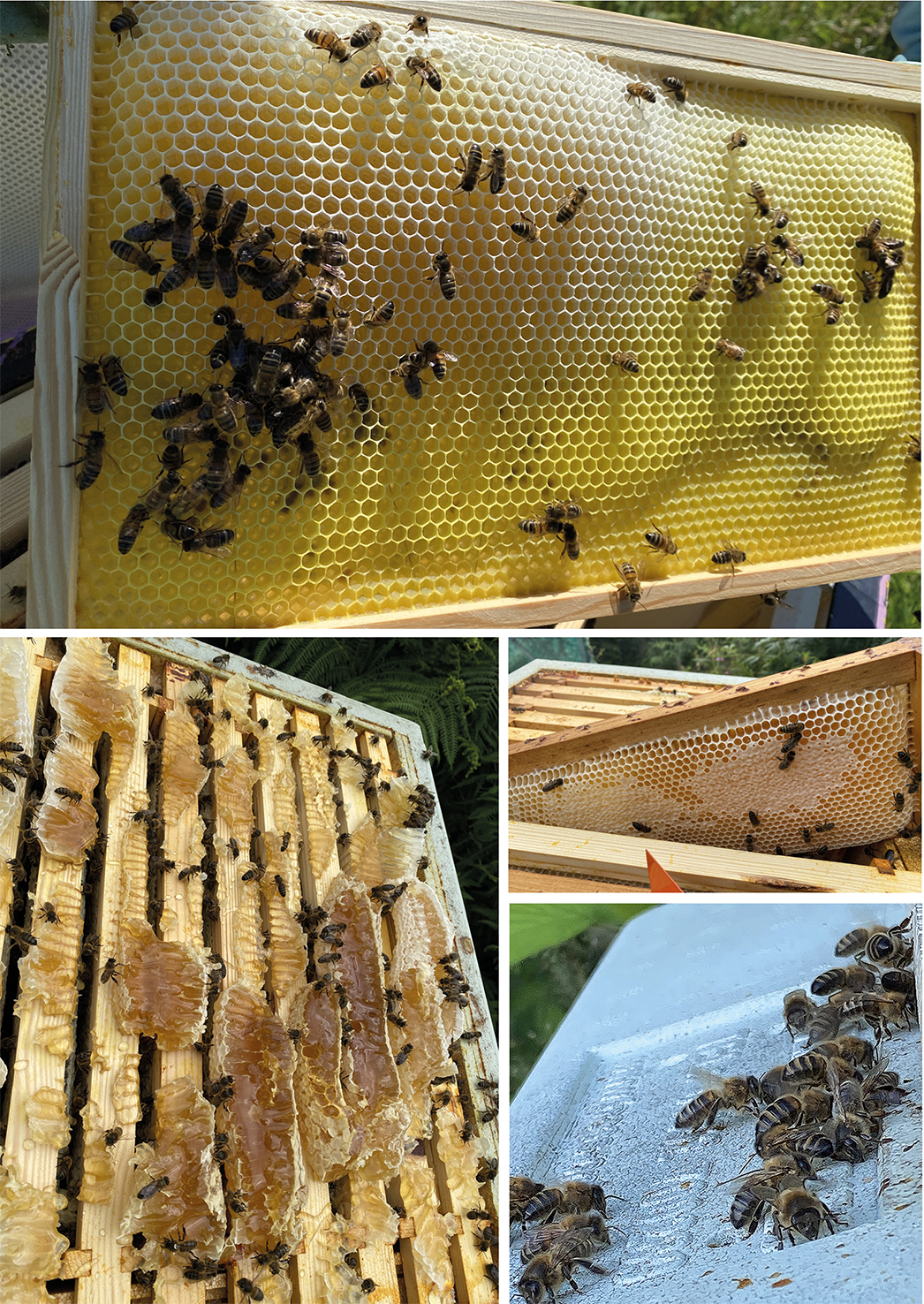 Clockwise from top. The bees are filling up the cells with honey faster than they are being made/ A partially capped frame of honey/ Busy fanning the hive entrance to keep the others cool and evaporate water from the honey before it’s capped/ We’re trying to keep up with the bees filling up their honey stores, but another superbox should have been added here probably about a week ago.

We’ve had a couple of colonies swarm, despite trying to take measures early in the season to suppress the urge for those colonies to reproduce.  We split the strong colonies ensuring that they had adequate space, but the hunger for the bees to swarm and form new colonies was too great. Fingers crossed that we don’t have any more.

When doing our inspections we’ve been closely watching the health of our bees, to ensure that the varroa mite load isn’t building up too much, whilst also being vigilant to other nasties. They can have a detrimental effect on the colony health and make them susceptible to other bee diseases. It’s also the time of year that we monitor the apiary for other pollinators.  Wasps try to enter the hives, rob the honey and generally make a nuisance of themselves. There can be quite a fight between a defensive bee on a hive landing board and a wasp. A strong colony can withstand a prolonged attack, but weaker colonies will find their defences continually tested and wasps may prevail and feed on the bees honey stores. 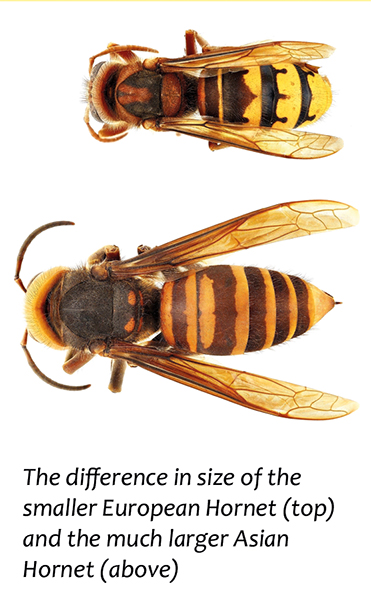 The other deadly predators to an apiary are hornets. It is becoming quite common for the European hornet to frequent our area and they are extremely vicious to honey bees. They can decimate a honey bee colony in hours with their gruesome attack. They bite off the heads of the worker bees, can enter the hive and also eat the larvae. Their sheer size of 2-3cm for a worker and 3-4cm for a queen, can make them quite intimidating. They have frequented our shores in the last 20 or so years and are becoming increasingly common in Wales, due to our climate getting warmer and also with them hitchhiking on vehicles and imported  produce.

The Asian hornet was accidentally introduced into France in 2004, where it has spread rapidly. These are also highly aggressive predators of our native insects and pose a significant threat to honeybees and other pollinators. There have been no sightings of the Asian hornet in Wales as of yet, but there have been in Cornwall. Any sightings should be reported to DEFRA, on their specific email dealing with sightings solely of the Asian hornet,  alertnonnative@ceh.ac.uk. Bee inspectors from their local units will then investigate reported sightings. Emails should be accompanied by a picture of the suspected Asian hornet. Please see the accompanying picture of the difference between European and Asian hornet. 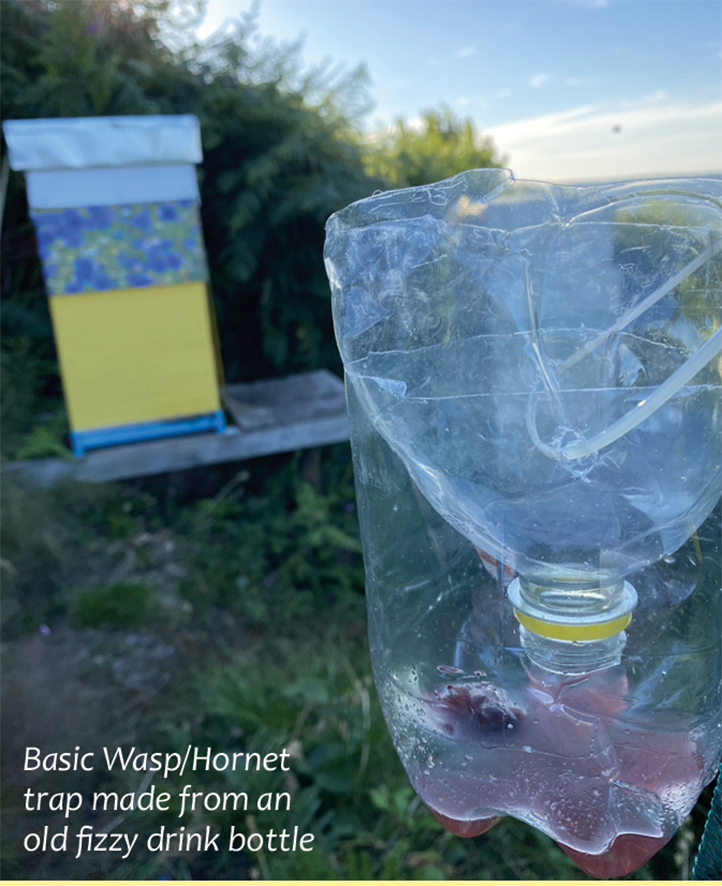 To protect our bees and the honey crop and limit the amount of wasps and potential hornets around the hives, we’ve been making simple traps and placing them strategically around the apiaries. These can be made using an old plastic pop bottle.  Cut the bottle in half with a sharp knife, remove the cap, turn the top part of the bottle over and insert it into the bottom portion of the bottle, so that the cap/ lid part is facing downwards into the bottom of the bottle. Holes can be drilled into the sides of the bottles. Then we just add bait and hang them up. The bait that is used typically changes at different times of the year, in accordance with the diet of wasps. In spring time a meaty bait is favoured, whilst the summer months, jam or a sweet liquid in the bottom of the trap is preferred.

So our beekeeping year continues busy as ever.  Whilst we have these spells of hot weather we need to maintain a plentiful water supply close to the apiary to prevent the bees dehydrating.  Other than that and ensuring that the bees have plenty of room for the honey, the next few weeks will hopefully pass by with few issues. 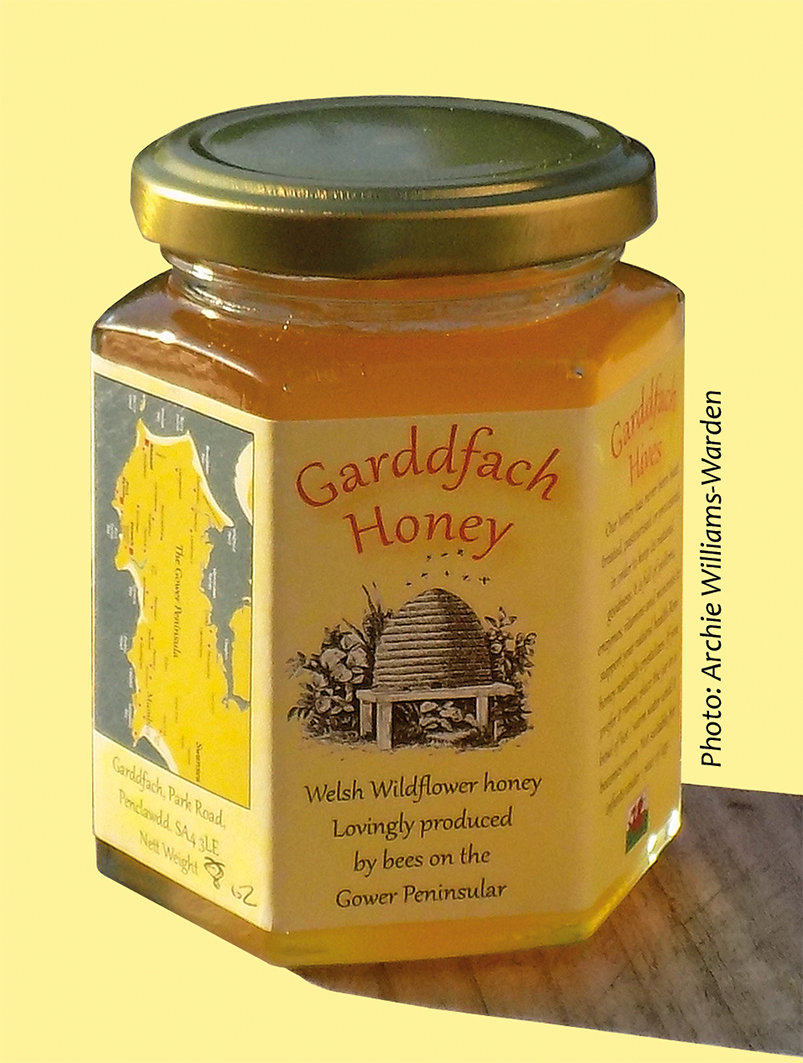 Fascinating fact To seal up holes and cracks and to reinforce the hive, bees make a substance called propolis.  This is a mixture of the bee’s saliva and sap from poplar and evergreen trees.  Essentially it is beehive glue.  Although the bees use propolis mainly as a caulk, they also use it to mummify intruders. Humans are also using it increasingly to fight off bacterial, viral and fungal infections.  Research has shown that raw propolis may help relieve cold sores, open wounds, herpes, sore throats and eczema.   It has also been suggested that due to its antiseptic, anti-inflammatory and anti-fungal properties, propolis may also have a role in treating some cancers.

Honey from my hives in Penclawdd is available by emailing me at marcus.treadwell@hotmail.co.uk or calling 07478704566 subject to availability. Follow me on instagram: garddfach_honey