Liz Hinds’ method of map reading resonates with many of us; surely following a route in the direction you are travelling makes perfect sense. But as she so rightly points out, you don’t necessarily have to be going on a journey to feel lost. 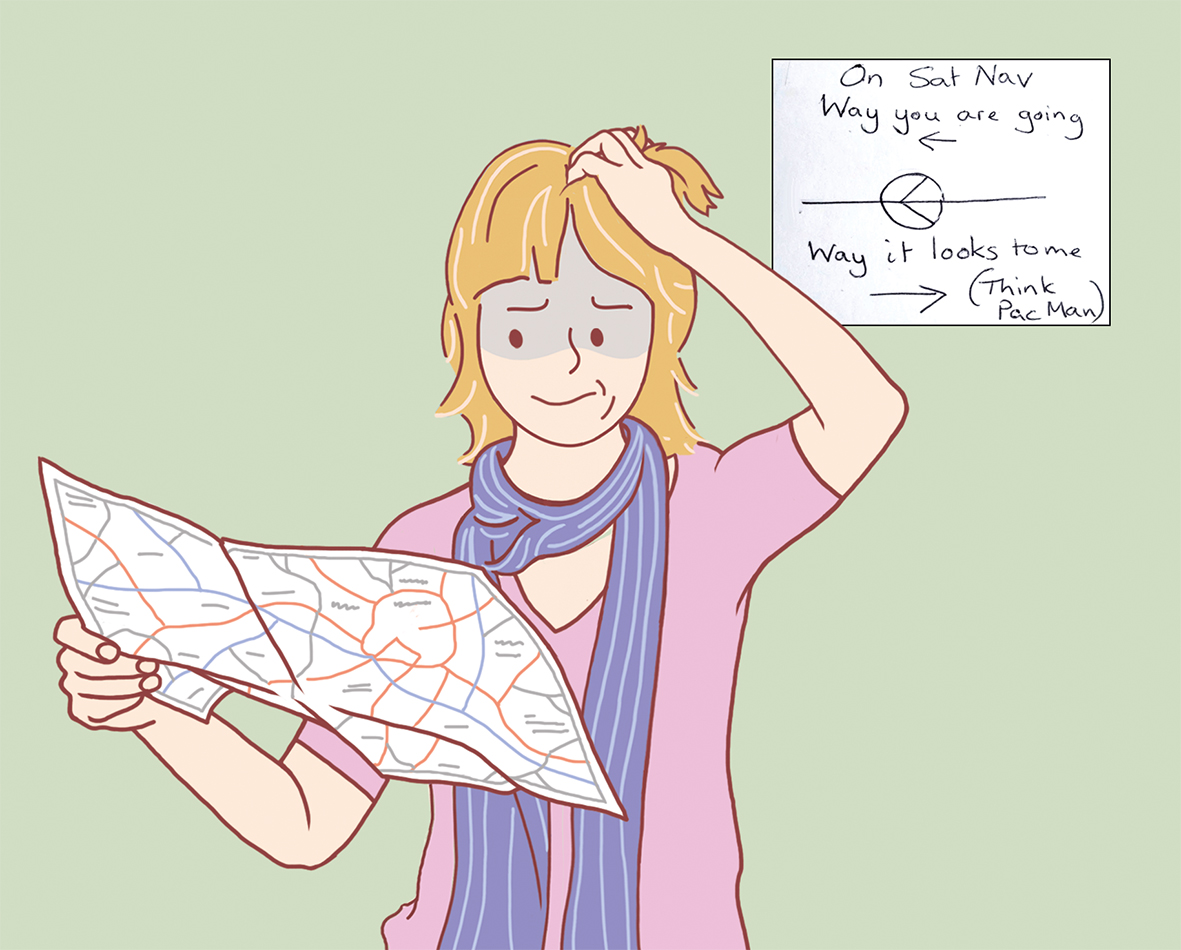 “Yes, lovely I’m sure but didn’t you say we had to turn left soon.”

“Back there? You mean we’ve passed the turn?”

“What do you mean we might have done? Have we or haven’t we?”

“You’re the one navigating. You’re supposed to know where we are.”

I for one am exceedingly grateful for sat nav technology. It makes journeys much less stressful. Husband is always designated driver when we go on holiday. He enjoys driving but you wouldn’t know that when I have inadvertently taken us on what I call the ‘scenic route’ and he calls a long unnecessary diversion.

My point that you get to see far more of the beautiful countryside my way doesn’t go down well with a grumpy tired driver.

I am easily distracted it’s true. Lambs, a pretty tree, an unusual gatepost, can all draw my concentration away from the map that I’m supposed to be following, and while we’re talking about maps there are two things I need to say.

One: roads should be painted the same colour they are on maps. At least then I would have a better idea if I’m on roughly the right road or not.

Two: it’s perfectly normal to have to turn the map upside down so it’s going in the same direction as you are. There is absolutely nothing odd in that.

So as you’re probably gathering navigating joins ballroom dancing and kayaking as the cause of most arguments in our household. Which is why I am, as I said, a big fan of sat nav. Even if I do shout at her occasionally. I mean, she says, “prepare to turn right in four hundred yards,” as if I know how far four hundred yards is. (I also have a problem with her map – see my little diagram above.)

But, unlike sat nav who took us two hours out of our way on an already long journey, I’ve never got us really lost. Yes, I’ve caused us to take minor detours but it’s not always my fault. We were on holiday in Ireland one year. I’d planned the route for the day out but we’d just passed a sign saying the turning I wanted us to take was closed. However as we drew near to it and slowed down to check a workman further up the road signalled to us to come on up. We assumed the work was finished and the road was being reopened. We reached the workman who leaned into the car, smiled, shook his head and said, “This road’s closed. You can’t come up here.” That famous Irish craic.

I do remember being lost as a little girl coming back from the sea on Caswell. Not lost lost; I just couldn’t see my mum on the beach. It was only a few moments until I spotted her waving to me but they were scary moments.

Of course we don’t have to be physically lost to feel the pain. There are plenty of ways to be lost. We can be lost in a bad relationship where there is more hurt than love, lost in a job that drains us of enthusiasm for life, lost in our shame for things we’ve done or left undone, or lost in our obsession – for money, power, a person. And we can even lose sight of ourselves, who we are, who we were created to be.

Sometimes I find myself lost in that eddy of striving to be good and failing, and going deeper and faster into the whirlpool of depression.

Jesus tells a story about a silly little sheep who wandered off from the rest of the flock. At the end of the day when the shepherd counted his flock he realised there were only ninety-nine not the hundred there should have been. He immediately left the ninety-nine and set off to find the one that was lost.

Now leaving all the others on their own doesn’t sound very smart to me. I wonder what the reaction of any shepherds in the crowd listening to Jesus telling the story would have been. Would they have gone to look for the lost sheep, or would they have shrugged and said, “We always lose one or two along the way.”

But if I were that little lost sheep I know I’d be glad that someone cared, that someone was out there looking for me, calling me by name.

We can only be truly lost if nobody cares and for Jesus that one little lost sheep was too important to not care about. He was so valuable he had to be found. Like lambs we sometimes go astray but we are too precious for Jesus to give up on.