This month we head to the Alps with photographer Thomas Crauwels, discover the role Wales’s legendary Rockfield studios played in the annals of music, uncover the history of Welsh food, and learn about why artificial intelligence is going to make our lives easier. 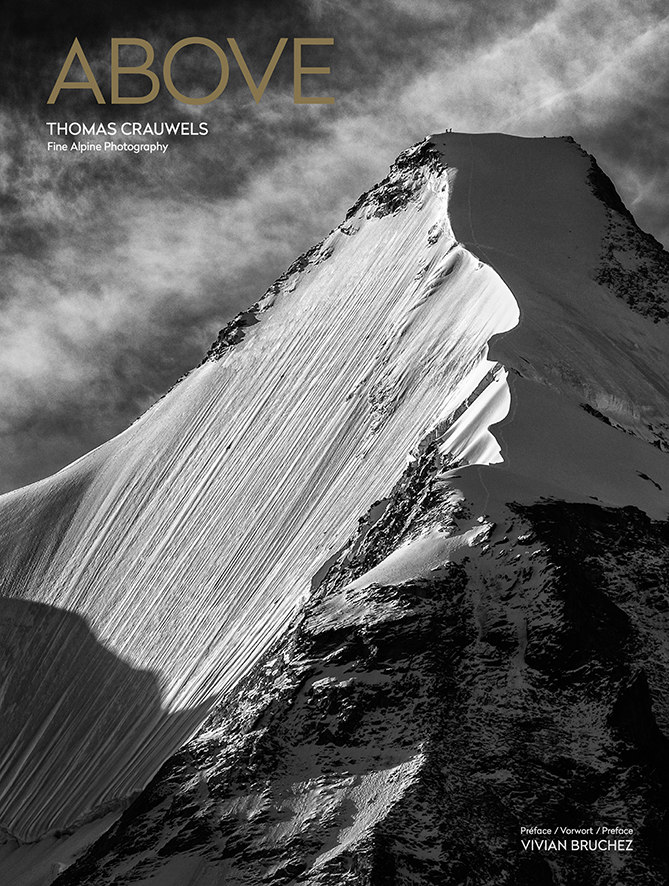 There’s something deceptively simple about Belgian landscape photographer Thomas Crauwels’ debut portfolio. It’s a classic collection of black and white alpine images, clean-cut mono-chrome shots for a stylish monograph with a straight-forward single word title. While others might be tempted to embellish what their work is about with a fancy in-depth sub-title, Crauwels just explains it as ‘fine alpine photography’. There’s a hint of a double meaning here because while you could argue that the pictures stray into the territory of fine art, by any objective measure their execution and presentation is ‘fine’ in the literal sense of their understated professionalism. There’s a minimalism to his work that lets the mountains do all the talking, and what they tell you is that to be ‘above’ is to be in a good place. 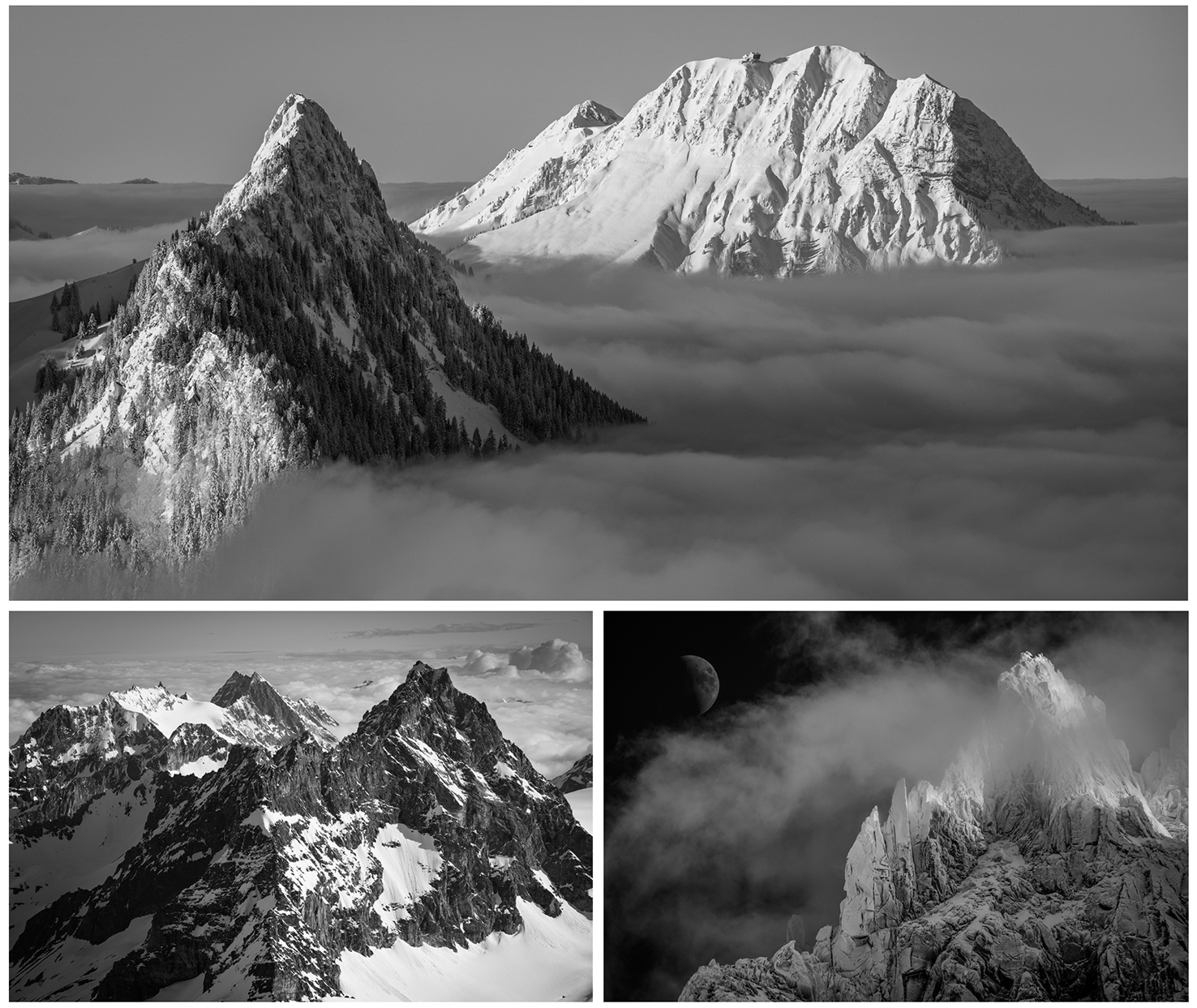 Crauwels is an extraordinary photographer, not just because his first collection of alpine imagery is so accomplished, drawing comparisons the great mountain artists of the past such as Galen Rowell, Vittorio Sella and Ansel Adams. It’s also because, just a few short years ago he was an information technology geek with no experience of either photography or mountaineering. It’s a good story: nerdy computer guy leaves the flatlands of his home country to follow a job promotion to Switzerland where he took a few snapshots of the local mountains to share with friends back home. The concept started out as using photography simply to tempt people to come to visit him. As his ideas for presenting the landscape became more ambitious, he decided that the best way to take the images he wanted was to learn how to ski, climb and take photographs properly. When I phoned him to ask why his book is in black and white, Crauwels explained that “I have literally a black and white personality. When I decide to achieve something I give it all the energy that I have to give, and I do only that. I wanted to communicate the emotions that I felt as I explored the area from Chamonix to St Moritz. I wasn’t interested in blue skies at all. Too boring. I liked the drama of the clouds.” The result is the superb ‘Above’ and a new photographer to watch out for. 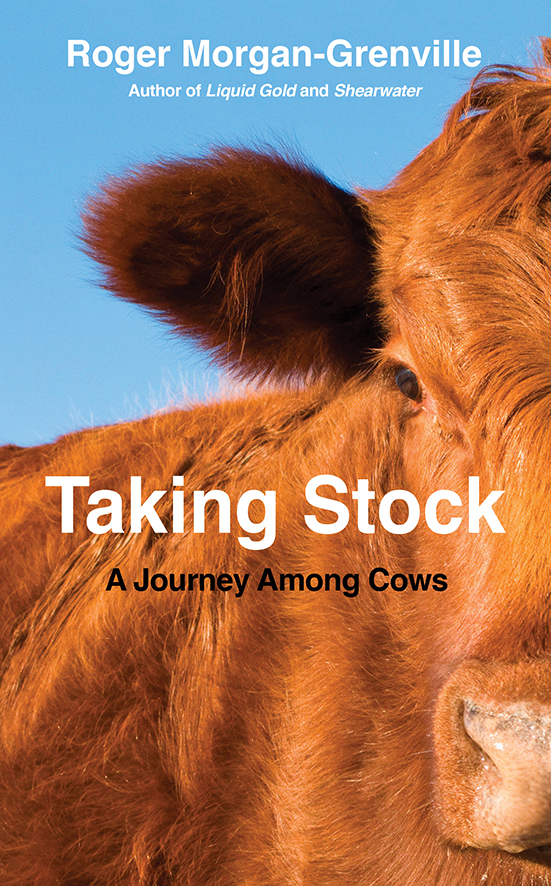 Ten thousand years ago we domesticated them and now there are a billion among us. They are resident in every country on Earth (apart from Greenland and the Vatican). They feed us, give us milk, clothe us, do the heavy lifting, provide ferti-liser, are crucial to religions and were central in the development of vaccination (the word ‘vaccine’ probably comes from the Latin for cow, ‘vacca’). And yet, as Roger Morgan-Grenville points out early in his Taking Stock, no one ever called a cow ‘man’s best friend’. Maybe this is because we’re too busy pointing the global warming finger of blame at them for having the temerity to belch a bit while human-made power stations, industrial processes and aeroplanes ruin the air we breathe. Pity the poor cow that has unwittingly become the battleground where we test ideas about diet, lifestyle, biodiversity loss, land and water use, as well as animal ethics. And yet most of them are treated awfully by humans, kept in ‘sunless sheds and joyless barns’. All of which means that the cow’s image could do with something of a facelift. And it is fortunate for us that Morgan-Grenville (whose earlier Shearwater was such a favourite with Bay readers) is here to lead us through the process in a book that is part memoir, part manifesto, but overall a cri de cœur on behalf of Ermintrude, Daisy and Clarabelle. A former soldier, our author with no farming experience, signs on as a labourer on a beef cattle farm to tell their side of the story in unputdownable style, in which every page is an eye-opener. 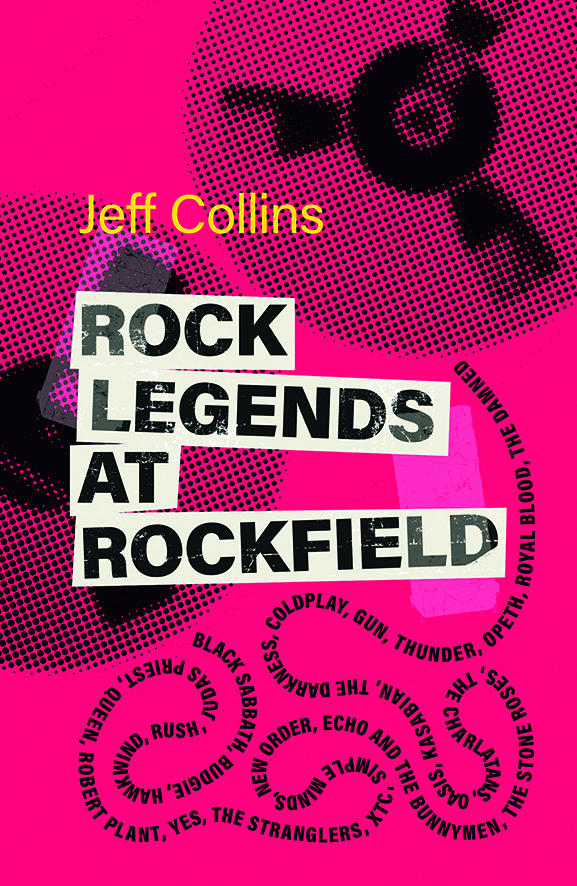 In 1974 a promising rock band by the name of Queen released their third album Sheer Heart Attack. It was the record that marked the end of their pursuit of the crown of British rock royalty Led Zeppelin, as Freddie Mercury and Brian May developed their own signature high camp baroque’n’roll style of multi-overdubbed guitars and ornately layered backing vocals. You could argue that this was when Queen as we know and love them today were born: and if you want to know where that happened, then the answer is Rockfield, a modest residential recording studio – in fact the world’s first – in sleepy Monmouthshire. If this all sounds just a bit like the stuff that legends are made of, that’s because Rockfield is exactly that, with author Jeff Collins just the right man to tell its story. And a great read it is too, because Rock Legends at Rockfield is unashamedly a guitar-thrash romp presented with an all-amps-set-to-eleven swagger and flourish. Updating his classic in anticipation of Rockfield’s sixtieth birthday, this new edition fairly clangs along to the mighty sound of heavyweight names being dropped from a great height, an account in which Collins explains exactly why any artist that dreams of becoming part of rock folklore wants to record at the studio. A cornerstone of music history, Rockfield’s legends include everyone from the Stranglers to the Damned, Charlatans to the Stone Roses, Coldplay to Rush, Judas Priest to the Darkness. And, of course, Queen to the king of British heavy rock, former Zeppelin frontman Robert Plant who would return to Rockfield time and again to get on with his job, far away from the glare of being the most famous rockstar on the planet. Totally awesome. 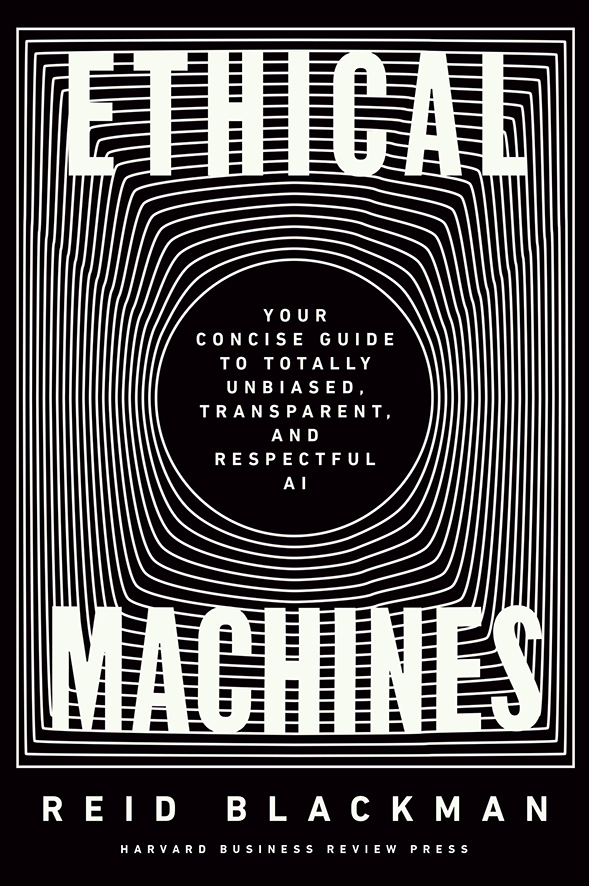 As Reid Blackman says in Ethical Machines, the promise of artificial intelligence (AI) is ‘tantalising’. Its ability to handle large quantities of data and make lightning-fast decisions means that there are big gains to be made where it is applied properly. And yet, there are risks that come with handing over routine tasks to AI, and the outcomes can be serious. As Blackman says, there are plenty of companies that have learned this the hard way. Amazon abandoned its CV-reading AI after two years because the company “couldn’t figure out how to stop it discriminating against women.” There’s the case of the US healthcare company currently under investigation for creating an AI that recommends focusing medical attention on white patients rather than those of other ethnicities. Goldman Sachs was investigated for having an AI that set credit limits on its Apple card lower for women than men. And as for Facebook and AI: “well, there’s just a lot there.” These pitfalls can be avoided, says Blackman, by considering ethics when putting in place black box algorithms. Perhaps counterintuitively, it’s not a question of regulating human behaviour (which companies are prepared for) but of thinking through the consequences. To do this we need to stop thinking of ethics as a soft skill second to the technology and start taking the idea seriously. Good stuff. 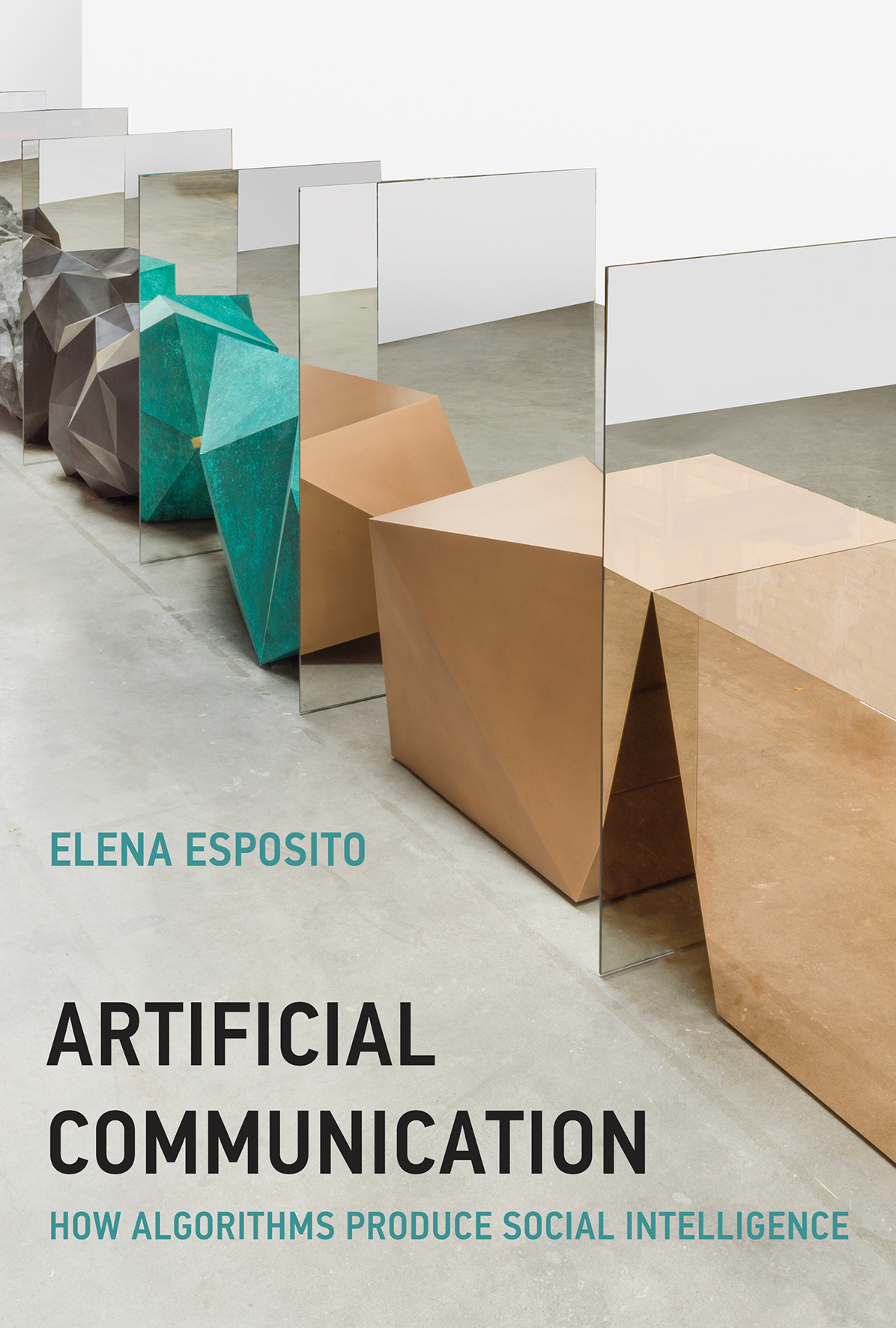 If you’ve ever wondered how your smartphone knows what your favourite songs are, the chances are you’re one of the millions of people starting to think that machines have become too intelligent for their own good. So says Elena Esposito in her new book Artificial Communication that carefully explains the paradox that makes many of us so uneasy with artificial intelligence and machine learning. The better AI systems become at driving cars, composing music and scanning books, the more our discomfort increases. You only have to peck at a text to find that the untrustworthy predictive text of yesteryear has given way to a spookily accu-rate set of suggestions about what your next word might be.

But in Artificial Communication, subtitled ‘how algorithms produce social intelligence’, Esposito argues that this might be a case of the tail wagging the dog. Instead of complaining that they are becoming more and more like us, why don’t we simply turn the telescope around and learn to think more like machines? After all, we built them, so there should be absolutely no need to be afraid of them. It follows that if machines really contribute to social intelligence, it will be not because they have learned to think like us, but because we have learned to communicate with them. The strength of this idea lies in the inescapable fact that our daily lives are going to depend more and more on how we deal with machines. After all, the possibility that we may not be talking to a human when we book flights, buy tickets and pay bills online has rapidly shifted into the area of probability, if not certainty. 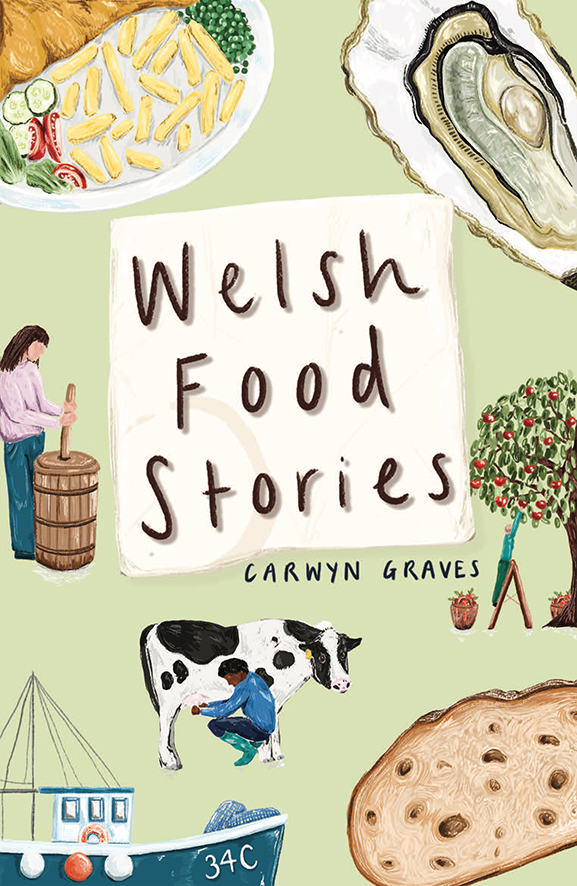 One of the reasons we don’t normally think of Wales as being a place of refined and defined cuisine is that over the centuries, as we’ve concentrated on the industrial product-ion of metals, the excavation of minerals and the quarrying of rock, food has taken a back seat. Ask anyone what Welsh food is and they might mention leeks, cockles and Caerphilly cheese, tea cakes, laverbread and bara brith. Hard to argue with that. Take a spin around Swansea’s covered market and the incontrovertible evidence will be there before your eyes. But, as Carwyn Graves explains in his superb Welsh Food Stories, the real narrative behind our nation’s often overlooked cuisine is complex and nuanced, as much to do with language and economy as it is with agriculture and tradition. Drawing upon the pioneering work of food historians and his own travels across the country, Graves uncovers the story of traditional Welsh foods and the people. We learn how Wales became a centre for cider production, and the story of ‘Welshman’s caviar’. We meet the drovers who for more than two centuries exported cattle to markets in London, creating early banking systems that enriched farmers in Snowdonia. And we discover the reasons behind our love of leeks and toasted cheese. Graves also introduces today’s farmers and food producers who are developing and reinventing old methods and reviving long-forgotten ingredients. From flour millers to cheesemakers, chip shop owners to cockle harvesters, the book shines a spotlight on the importance – environmentally and socially – of keeping local food production alive.